WOLFSBANE - ONE OF THE ACONITES: HISTORY AND USES OF NORTHERN WOLFSBANE

(NORTHERN) WOLFSBANE, ACONITUM LYCOCTONUM
The northern wolfsbane is native to and western and is a member of the buttercup or Ranunculaceae family of plants. As such it is related to the Lesser Celandine, marsh marigolds, black cohosh, wood anemones and goldenseal. Wolfsbane was known to the ancients, and Pliny the Elder has a few suggestions about how it got the name Aconitum. His first suggestion is that it comes from the “, of evil repute for the poison called aconite” but the he says the word might be a reference to the rocky crags on which it grew which were barren. He further says that perhaps it came from the word akone which means whetstone, so-called because it has the same power to cause rapid death as whetstone had to “give an edge to an iron blade.”

The plant is extremely toxic and its poison can be absorbed through the skin, so it is best avoided. This cautionary tale is told by Nikander, circa 130 BC: he refers to it as the “woman-killer” saying that Calpurnius Bestia was accused of killing women while they slept, by inserting his finger which was smeared with wolfsbane poison into their vagina or onto their vulva while they slept (?). The poison causes respiratory or heart failure resulting in death.

Dioscorides writing his De Materia Medica in the first century AD describes two different plants, the first used in eye lotions to relieve pain, and to kill wolves, and this is believed to be wolfsbane. The second plant he describes is now called Monkshood, another member of the aconite family, which was also used to kill wolves. Perhaps these plants were the poison used in the “wolf peach” which was used as bait for wolves. Europeans believed that the tomato was the ancient wolf peach when it first arrived in . 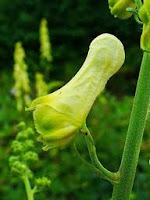 These ancient writings are clearly the reason for the plant’s modern name, wolfsbane. (The bane, death or heavy burden of wolves.)
This plant has yellow flowers whereas Monkshood, also called wolfsbane, has blue-purple ones. Yellow wolfsbane flowers between July and August, and can grow to over a metre tall. Reportedly the root has been eaten after boiling in , but even touching this plant is not recommended.

The root has been used in traditional medicine systems after careful preparation, for a variety of illnesses, including for obstructions of the body’s organs, coughs, as a diuretic, and to promote sweating in fevers, as a sedative and stimulant.

The key toxins in this plant are the alkaloids aconite and aconitine. You can become unwell simply by smelling the flowers, so don’t be tempted! Because of its distinctive, unpleasant taste there have been few reports of accidental death from ingesting wolfsbane. Richard C. Dart in his book “Medical Toxicology” has this to say of it: “Most poisonings occur when these plants are used in herbal remedies, or mistaken for parsley or the roots of horseradish or celery.” This is a reference to deaths caused by poisoning in where the plant is used in herbal medicine.
Posted by abbas at April 05, 2012

Email ThisBlogThis!Share to TwitterShare to FacebookShare to Pinterest
Labels: WOLFSBANE