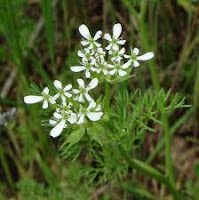 SHEPHERD’S NEEDLE, LADY’S COMB, SCANDIX PECTENS-VENERIS
Shepherd’s Needle is native to , and the Mediterranean region through to the western . It is a member of the carrot or Apiaceae or Umbelliferae family of plants and as such is related to caraway, dill, fennel, sweet Cicely, anise, lesser and greater burnet saxifrage, cow parsley, parsley,  water dropwort or water fennel, hemlock, lovage, Alexanders, and Thapsia among many others. 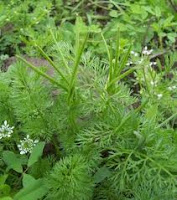 In it is now confined to and some other parts of south-east , and is Critically Endangered there. However in other parts of its native region such as it is thriving. In it is being threatened by agricultural methods and loss of field margins, as it is a plant that used to thrive on arable land.
It grows to heights of around one foot eight inches, with umbels of white flowers appearing between April and July. The young stem tops are edible and can be added to salads or eaten in soups and stews, or simply used as a pot-herb to flavour these.

The plant contains carotene and vitamin C so was good to protect against scurvy in former times. It is also rich in minerals containing iron, phosphorous, sodium, calcium, manganese, magnesium, copper, zinc, chromium and nickel. It also contains the fatty acids, palmitic, stearic, linoleic and linolenic and is a source of Omega-3 although not very much. It provides dietary fibre, protein and carbohydrates and could be a useful addition to human diets, as it has anti-inflammatory and antioxidant properties.
Nicholas Culpeper, writing in the 17th century had little to say about the medicinal virtues of this plant, but this is what he wrote:-
“Government and virtues. This little plant is under the government of Venus. When taken as a medicine, it operates by urine, and is good against obstructions of the viscera.”

The names Scandix in ancient Greek means “chervil” and pectens-veneris, comb of Venus, although calling it “Lady’s comb” meant that the pagan reference to a Roman goddess was transferred to the Virgin Mary, (Our Lady). The plant probably gets its name from the needle-like structure of the seed pods.
The ancient Physicians of Myddfai found uses fro the Shepherd’s Needle, suggesting that it was fairly plentiful in Mid-Wales during their time. This is what they wrote and their remedies using Shepherd’s Needle in combination with other herbs (the notes in the brackets are mine):-
“ISSUES AND SEATONS.
. Viper's garlic, and shepherd's needle. The juice of the roots will form an issue (liquid would flow from a wound or lesion on the skin), that of then leaves a seaton. (Cyst or fistula, now seton)”

Here is their remedy for “pneumonia” and other lung diseases.
“There are three kinds of lung disease; — simple pneumonia, white pneumonia, (bronchitis) and black pneumonia, (phthisis) which is marked by pain below the mamma, under the armpit, and in the top of the shoulders, with (hectic) redness of the cheeks. And thus are they treated. Let (the patient) take, for three successive days, of the following herbs ; hemlock, agrimony, herb Robert, and asarabacca, then let him undergo a three day's course of aperients. When the disease is thus removed from the bronchial tubes, an emetic should be given him (daily) to the end of nine days. Afterwards let a medicine be prepared, by digesting the following herbs in wheat ale or red wine: madder, sharp dock, anise, agrimony, daisy, round birthwort, meadow sweet, yellow goat's beard, heath, water avens, woodruff, crake berry, the corn cockle, caraway, and such other herbs as will seem good to the physician. Thus is the blessed confection prepared. Take of May butter, a she-goat's suet or a doe's fat, the shepherd's needle, and as many as may be desired of such herbs as may be suitable for the purpose. A wounded lung is the physician's third difficulty, for he cannot controul it, but must wait for the will of God. By means of the herbs just mentioned, a medicine may be prepared for any one who has a pulmonary abcess (empyema.) He should let out (the matter) and support (the patient) as in the case of a wounded lung, till he is recovered. But most usually, he will have died within the year.”
Posted by abbas at August 01, 2012 65 comments: