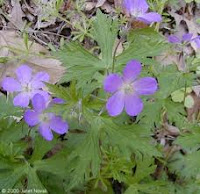 WILD GERANIUM, SPOTTED CRANESBILL, SPOTTED GERANIUM, GERANIUM MACULATUM
This wild geranium is native to eastern and can be found in wet or damp places, in swamps, marshes, moist woodlands and meadows. It is a member of the Geraniaceae family of plants.
This wild geranium can grow to heights of around two feet, and may have pink, lilac rose-purple or pale violet flowers, and sometimes, but more rarely, white ones. It is also called, in different areas, alum root (but it has no relation to alum or to Heuchera glabella which is also called alumroot). Geranium comes from the Greek, geranos meaning crane, and Cranesbill refers to the seed-like capsules.

It was used by Native Americans for STDs and for diarrhoea, and the herb became a favourite herbal remedy for the early settlers. Boiled in milk, the root is said to be effective against diarrhoea in children. The boiled root was also used for toothache and crushed to a paste applied to piles. The plant became official in the US pharmacopoeia between the years 1820 and 1990, and is believed to be valuable for dysentery, for the stomach, and Irritable Bowel Syndrome, and was used to staunch haemorrhages in the lungs, uterus, bowels and stomach as well as being used for excessive nosebleeds. It is supposed to be good for cancer of the stomach, but there have been few clinical trials carried out on this plant.

A lotion made from the root was applied to runny eyes and the root, with cayenne pepper was made into a decoction for typhoid fever and childhood cholera. In the 19th century the root was used as a remedy for gastric ulcers, to relieve pain and perhaps to cure them. An infusion of the root was given for kidney troubles and to stop a heavy menstrual flow and for period irregularities in general.
It is deemed best to harvest the root just before it comes into flower, which it does in April, blooming until July. The root is at its most potent medicinally before the flowers bloom. 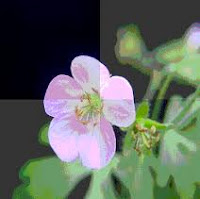 The whole plant, especially the root is considered an astringent as the leaves and root are tannin-rich, so it is a good wound healer, and useful for loose bowel movements. It is also a useful diuretic and has been used as a general tonic.
Externally the root has been used not only for piles, but also for thrush and vaginal infections as well as mouth inflammations.
When combined with Geum urbanum, avens, comfrey (Symphytum officinale) and Agrimonia eupatoria, common agrimony it is said to be effective for stomach problems especially for peptic ulcers.
However the traditional uses of this plant have yet to be supported by clinical research.
Posted by abbas at June 17, 2012