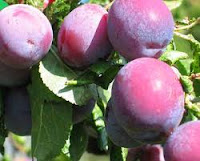 PLUMS, PRUNES, ALOO BUKHARA
There are more than 2000 varieties of plum which grow around the world. The aloo bukhara, (which in Urdu means the potato of Bukhara, is in fact a corruption of  alu in Farsi, which means plum) grows in Iran, Iraq, Pakistan and India. Bukhara is a famous ancient city, and was founded long before AD 800 when the modern city was founded on an older site. It was the centre of learning along with Samarkand and is now situated in Uzbekistan. It is now famous in the region for its rare books which date from the 13th century, (Genghis Khan destroyed the city in 1220, but it was rebuilt) when it was the centre of Sufi Islam. Now it is famous for carpets as well as rare books. It was an important centre of trade on the Great Silk Road. The plums come into season soon, and we are looking forward to their arrival as they help to ward ff colds and flu. The Latin name for these plums is Prunus bokharensis. They are eaten raw, cooked and dried, and can be used to clean metal. The name Bukhara comes from the Sanskrit, “vihara” meaning “monastery” 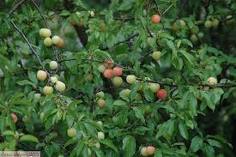 All plum trees are thought to have originated in the area around the Caspian Sea, and were introduced into Britain by the Romans, it is thought. In Roman times there were 300 known varieties. These go under the general name of Prunus domestica. The pilgrims took plums with them to America. In The Vale of Evesham, in the UK plums have been commercially produced since the 19th century and in Pershore there is an annual Plum Fayre held in August. I had a great aunt who lived close to Pershore and in plum season I particularly liked the Yellow Egg Plum, perhaps because of its name. It is said that this plum tree was found growing wild in nearby Tiddesley Wood in the early 19th century and records show that in 1870, 900 tons were taken to market at the harvest. In Britain the most popular plum is probably the Victoria, and Pershore is also famous for this and the Pershore Purple, and more recently the Pershore Emblem.
Plums are related to almonds and apricots and are members of the rose family. It is best not to eat any part of the plum (especially the seeds) which is bitter as they contain amygdalin and prunasin which are water-soluble substances which form hydrocyanic acid which is extremely toxic. However, in small amounts, this stimulates respiration, improves digestion and gives a sense of well-being. Plums also contain selenium which is probably responsible for this feeling. They also contain chromium, potassium and other minerals as well as the vitamins A and C so they help the eyesight and help the body to absorb iron. Plums also contain amino acids and Omega-6 fatty acid, and unique phytonutrients, neaocholorogenic acid and cholorogenic acid, which are classed as phenols, and have potent antioxidant properties. Regular consumption of plums can help to prevent cancer, heart disease and macular degeneration. Dried plums or prunes have a laxative effect and are used to cure constipation. However they are not as potent in this regards as jamalgota (Croton tiglium) which incidentally, you only need a pinch of to have the desired effect. Plums are also useful to asthma sufferers and those who have rheumatoid arthritis and osteoarthritis.
Each species of plum has its individual stone, so archaeologists could tell which plums were carried on Henry VIII’s flagship the “Mary Rose” when it was raised from the seabed.
PLUM JAM
Ingredients
6 lbs plums
6 lbs sugar
1½ pints water
Method
Put the plums in the water and bring to a rolling boil. When tender lower the heat and the sugar. Stir continuously and bring to a rolling boil again. Test to see if it has reached setting point after 15 mins. You do this by putting a drop from a metal spoon onto a cold saucer, waiting for a minute or two then pushing it with your finger. If it wrinkles, it has reached setting point and you can turn off the heat.
You need sterile jars, warmed, to pour the jam into and wax paper to cover it, then cellophane and then put a secure lid on the jar.
This is wonderful with toast or in creamy desserts and custards.
This has Taste and is a Treat.
Posted by abbas at January 27, 2011