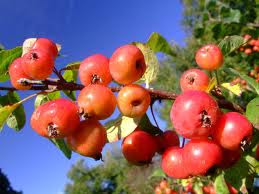 CRAB APPLES (PYRUS MALUS)
Botanists believe that crab apples are the survivors of the wild apple trees from which we get our different varieties of apples today. Crab apples were the hosts for the grafting of French varieties of apple which were brought to England after the Norman Conquest which began in 1066, with the Battle of Hastings. Prior to that apples had been introduced to Britain by the Romans, and Pliny records 22 apple varieties, although now we have more than 2000. The crab apple tree is native to Britain, however, with its gnarled branches and thorns, it nonetheless looks like an apple tree, as the flowers are similar ranging from white through to pink, and so are the leaves. You probably wouldn’t choose to eat a raw crab apple, although if you are fond of tart flavours, you might like them.
In fact there are crab apple trees in all Northern Hemisphere countries and they grow as far north as Drontheim in Norway. They are holy trees for the Celts and Druids as they act as hosts for the most sacred Druidic plant mistletoe. They are linked with shamanic practices and magic. The Druid’s Day of the Apple is 1st November , when a wassail bowl is prepared, consisting of roast or baked crab apples, brown ale or cider, honey, cloves, cinnamon, nutmeg, ginger and brown sugar. In Shakespeare’s play “A Midsummer Night’s Dream”, Puck says
“And sometimes lurk I in a gossip’s bowl,
In the very likeness of a roasted crab.”
Apples, and bear in mind they were probably a relative of, if not, the crab apple itself have featured prominently in the myths of many countries. In ancient Greek mythology, one of Hercules tasks was to get an apple from the tree given to Hera by the Earth goddess Gaia on her marriage to Zeus. It was a Herculean task because the tree was in the garden of the Hesperides and guarded by a dragon, Ladon.
Paris gave Aphrodite an apple to show that she had won the beauty contest of the goddesses. The apple was the fruit of the Biblical Tree of Knowledge and after eating it, Adam and Eve were cast out of the Garden of Eden. In Norse mythology, the apple is the symbol of love, wisdom and longevity, as Iduna kept apples in a box to give to the gods so that when they ate them they could renew their youth.
The ancient name for Glastonbury, so much associated with Arthurian legends, was Avallon, or the Isle of Apples. They were used by the witch, Morgan Le Fey to bring life back to the very sick in the old legends.
There are a couple of old sayings involving the health benefits of apple, “an apple a day keeps the doctor away,” and a rhyme:-
“To eat an apple before going to bed
Will make your doctor beg for his bread.”
The bark of the crab apple tree used in a decoction has been used as a treatment for intermittent fever with vomiting, and the astringent juice of a crab apple is good to stop diarrhoea. Cooked apples, or their pulp, can be placed on eyes to reduce inflammation, and if you have a sore throat and a fever, eat the pulp to relieve the soreness in the throat. The stewed apples have laxative properties, but not raw ones. This is true of all apples. Crab apples neutralize acids produced from gout and indigestion.
In his “Encyclopedia” of 1470 (one of the first printed mention of apples) Bartholemew Anglicus wrote a whole chapter on apples. He wrote that they are “gracious in syght and vertuous in medecyne…some beryth sourysh fruyte and harde, and some ryght soure and some right swete.”
An apple stuck with cloves was the first pomander, replaced by oranges later. In Shakespeare’s time apples and crab apples were served roasted with caraway seeds, and Shallow offers Falstaff “a pippin and a dish of caraway seeds” in Shakespeare’s play, Henry V. Apple cookery is mentioned in the old English text "Piers Plowman” and in Tudor times (15th and 16th centuries) people in Britain adored apple pies as they do today, but these were made with cinnamon, ginger and saffron, unlike those of today.
The most famous recipe for crab apples is crab apple jelly which is easy to make as crab apples have natural pectin, the setting agent.

Add a little water to the pan which should be stainless steel as the fruit is high in acidity. The water should not cover the crab apples, and they shouldn’t float. Boil with the ginger and cloves. Bring to the boil then simmer for about 20 mins until the fruit is soft. Don’t stir.
Strain then bring the liquid to the boil again and add the sugar now. Then cook for a few more minutes until the liquid coats a metal spoon and gels.
Pour into sterilized jars, to a quarter of an inch from the top. Cover with tight fitting lids or better still, use Kilner jars’
This has Taste and is a Treat.

Stick two cloves in each crab apple, and put them into jars. Bring water, vinegar and sugar to the boil with 1 tbsp of cinnamon if you wish. Pour the syrup over the crab apples. Leave to cool and seal in the jars.
This has Taste and is a Treat.
Posted by abbas at September 07, 2010