AGRIMONY, AGRIMONIA EUPATORIA
Agrimony is an ancient healing herb or vulnery which was certainly used by the Meddygon Myddfai, or Physicians of Myddfai in ancient Wales. These were a long line of gifted herbal doctors whose beginnings are shrouded in the mists of time, but are thought to have begun in 800 AD. Their herbal lore was supposed to have come from the founder who fell in love with the Lady of the Lake, a fairy who eventually returned his love and bore him three sons. The herbal lore of these physicians continued until the 1800s and was transcribed in The Red Book of Hengist, The Mabingion, in the 13 the century. This book is still in print. The herb is Y Tryw in Welsh and was used along with betony and vervain, boiled in ale and milk for mastitis. It was sacred to the Celtic goddess Danu.

It was known to Dioscorides in the first century AD who recommended it for “bad livers” and snake bites. There are various beliefs about how the herb was named, some saying that it was named eupatoria after the King of Pontus, Mithradates Eupator, who was a bane of the Roman Empire, and who ruled Pontus from 120 BC until 63 BC. He was thought to be a magician and herbalist who doused himself with plant poisons to protect himself from injury. The name Agrimonia may come from the Latin “agri moenia” meaning “defender of the fields” as it was a common sight in meadows and hedgerows, or it may come from the Greek name for plants which healed eyes and made them shining “argamone”.
Agrimony was used with other common herbs in the countryside in Britain as a “spring drink” or a “diet drink” and was believed to purify the blood. The Anglo-Saxons called it Garclive and used it to heal wounds, snake bites and to get rid of warts, among other remedies. They also believed that if they carried it on their person it would protect them from goblins. Agrimony was one of the seven herbs they used in their “Holy Salve.” In Chaucer’s time it was called Egrimoyne and used with mugwort and vinegar to relieve back pain and “alle woundes.” There was a remedy of the 12th century which called for agrimony to be mixed with one pound of frogs and human blood to stop internal bleeding. It was one of the herbs used in L’eau d’arquebusade which was used to heal wounds inflicted by the arquebus, a type of early hand gun employed in the 15th century. In France it may still be found and is used to treat sprains and bruises. 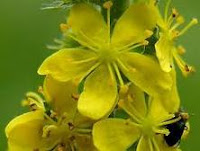 Its other common names are Cockleburr, so called because the seed pods stick to animals and people’s clothes, and Philanthropos, (people lover). Gerard writes that this may be for the reason mentioned or because of its healing properties, but he seemed to believe the former reason was the correct one. He also wrote that it was good for those who lead “naughty lives”.
It is also called Church Steeples because of the tallness of the plant and its flowers, it is reminiscent of mullein but not as tall and the flowers are not as close together, although they are usually yellow.
It is a member of the rose family of plants and has a fragrant smell with a faint hint of lemon. It tastes rather like apricots, and makes a pleasant tisane. Culpeper recommended it for external use as being good for the skin and healing wounds and suggested bathing in water in which it had been steeped. He also says that a decoction taken in wine was good for snake bites, colic and bad breath as well as being effective against coughs.

This rhyme was found in an old English manuscript: -
“If it be leyd under mann’s heed.
He shal sleepyn as he were deed;
He shal never drede ne wakyn
Till fro his heed it be takyn.”
In other words it induces profound sleep and if it is under your pillow, you won’t wake up unless it is removed. Today mugwort and agrimony are used in Dream pillows.
Agrimony should be gathered when it is in full bloom and spread out to dry on a wire rack in a very sunny spot. Turn the parts of the plant at regular intervals until it can be crumbled to a powder. It can be stored for future use in airtight jars. Dry all parts of the upper plant, i.e. flowers, leaves and stem. You can use them in the tisane recipe given below, which is effective against diarrhoea and blood loss in the urine or stools. It can also be used as a gargle for sore throats and mouth ulcers. It has been used in traditional medicine for liver complaints including jaundice and will aid digestion. It is said to be good for the blood and skin and a strong decoction of the crown of the root system and leaves boiled in water and mixed with honey was especially used for skin problems. If you use this, you need to drink 2 or 3 small cupfuls every day for several months to clear the skin.

In Ayurvedic medicine a tisane is given to alleviate stress, anxiety and hypertension and lower blood pressure. It is also a diuretic and as it contains Vitamin K it is a good blood clotting agent. Modern medical trials have shown that it may be useful in treating bacterial and viral infections, in inhibiting the growth of tumours, for diabetes and hypertension, although more human studies are needed to substantiate these early findings. Trials are underway to teat its efficacy in treating skin diseases and gastrointestinal ailments. Germany’s Commission E has approved the use of the tisane for diarrhoea and as a gargle for sore throats to reduce inflammation and soreness.
You can make a poultice of the leaves and apply to the head during migraines, or use the tisane to treat athlete’s foot, or use freshly crushed fresh leaves. If you have conjunctivitis or other eye problems then 10 gr of the herb to 500 ml of water should be boiled together and left to cool then used as eyewash.
Native Americans have used agrimony effectively for fevers, and the tisane is a mild diuretic.
You can use it in pot pourris with dried flowers such as rose petals, lavender and violets. You can use the fragrant dried leaves for this purpose too. It is said that if you carry agrimony, along with rue, Maidenhair fern, broom and ground ivy, you will be able to recognize witches. If one happens to cast a spell on you then the agrimony will mirror it back and the evil will befall the one who cast the spell.
AGRIMONY TISANE
Ingredients
1 handful of dried agrimony (whole herb)
1 pint of boiling water
honey to taste
Method
Pour the boiling water over the dried herb and leave to steep for 15 minutes. Strain and drink a tea cup of it 3 or 4 times a day for all the ailments mentioned above.
This has taste and is a Treat(ment).
Posted by abbas at December 20, 2010

Email ThisBlogThis!Share to TwitterShare to FacebookShare to Pinterest
Labels: AGRIMONY