BRAZIL NUTS (BERTHOLLETIA EXCELSA)
Brazil nuts grow on Brazil nut trees but not as other nuts do. They grow in clusters inside pods which are rather like coconuts. These are the hardest nuts to crack open as they come in three sided hard outer shells. Inside the nut has a protective brown skin which prevents it turning rancid when exposed to the oxygen in the air. Once you’ve cracked the shell though, the seed or nut is packed full of nutrients and tastes delicious. If you live in the UK you’ll be happy to know that theses nuts are shelled when sold all because of another EU rule. The nuts have to be tested for ‘alfatoxin’ and it is cheaper to test nuts that have been shelled, so the supermarket chains choose to buy shelled Brazil nuts so that customers can afford to buy them. So fortunately or unfortunately as the case may be, there are no more problems trying to crack them open, and having to resort to a hammer. (Nut crackers tend not to do the job in all cases.)

Brazil nuts grow in the Amazon rainforest and the Brazil nut trees tower above the canopy, reaching 165 feet. The flowers blossom once a year and are pollinated by the Euglossine bee which is powerful enough to force open the hood which protects the store of nectar. The trees have been planted in plantations, but these bees are not plying the cultivators game and don’t like being kept in hives near the trees as they don’t produce enough flowers for a year’s honey production. They aren’t the most social of bees apparently.
When the flowers have been pollinated the fruit or pod begins to form and this can take up to 15 months to become ripe. The harvesters allow the pods to fall from the trees naturally and have to wait until they have all fallen to harvest them. No one wants to get hit on the head by one of them as they can weigh up to 2.5 kilos. The little rodent, the agouti, is the only animal that can crack open the pods with its teeth and the trees have to rely on this animal to propagate. Fortunately it hides the pods and like the squirrel forgets where it has hidden them, so after a year (it takes the pods that long to split open naturally) the seeds inside can begin to sprout. There can be as many as 300 pods on one tree and each pod will contain 10-25 seeds (Brazil nuts), which grow like the segments of an orange. 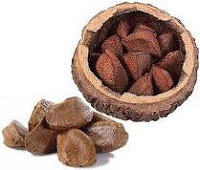 The fate of the Brazil nut was very much tied to the rubber market as harvesters would collect the pods in the rainy season (December to March) and then from May to November would harvest rubber. That was in the mid 19th century. Now the rubber business has moved to Asia and harvesters have a tough time if they only rely on harvesting Brazil nuts for a living. However there are moves to cultivate these trees in South America, as the trees grow not only in Brazil (which is not the main exporter of them) but also in Guiana, Venezuela, Peru, Bolivia and Colombia.
The Spanish and Portuguese explorers found these nuts in the 16th century and they were called “almendras de los Andes” in Spanish or almonds of the Andes. The sailors used them as a useful source of protein and fibre on their long voyages.
In the 1930s it was discovered that Brazil nuts contain barium and later in the 1950s radium was also discovered in these seeds. However there is as yet no evidence that either substance is secreted by the body; it seems able to flush these out of the system. However it is not wise to eat too many Brazil nuts. One or two a day is fine, but don’t go mad over the winter’s festive season and gorge on these nuts.
Having said that, these seeds are very beneficial for our health as they contain calcium, magnesium, phosphate, zinc, potassium, manganese, copper, iron, selenium, phosphorous, Omega-3 and -6 fatty acids, vitamins C, D and E as well as the B-complex vitamins,riboflavin, niacin, thiamin and B6, Pantothenic acid, choline, Betaine, and folate. Like walnuts, and cashews they are high in protein and fibre and are good for lowering cholesterol levels. They are gluten free as are almonds and pine nuts and the high level of selenium present in these nuts may help protect against breast cancer, prostate cancer and lung and bowel cancers. It also helps protect against heart diseases and thyroid problems.

Brazil nuts are also a source of the essential amino acid methionine which is lacking in most protein foods. This helps to break down dietary fats and convert them to energy. It in turn promotes the production of the antioxidant glutathione, which combats the free radicals which are responsible for premature ageing and some chronic diseases such as cancer. The glutathione recycles vitamin C which in turn recharges vitamin E and so boosts the immune system, helping it combat diseases.
Brazil nuts are used not only as a ‘snack’ food but are also made into an oil which is great for salad dressings. They are also used in the cosmetics, paint, timber and lubricants industries.
If you are allergic to mangoes, cashews, or pistachios, you may also be allergic to Brazil nuts as they are all related.
BRAZIL NUT COUSCOUS WITH APRICOTS

Ingredients
2 tbsps olive oil
200 gr couscous
30 gr dried apricots, chopped
30 gr Brazil nuts, chopped
1 tbsp lemon juice
2 tbsp fresh coriander leaves shredded
salt and freshly ground black pepper to taste
300 ml hot chicken stock
coriander leaves or basil leaves for garnish
Method
Heat the olive oil in a pan and add the couscous stirring so that it is all well coated. Cook on a low heat for 2-3 mins, stirring all the time. Add all the other ingredients and cook over a low heat, stirring occasionally until all the stock has been absorbed and the couscous is tender.
Fluff up with a fork, and garnish with the leaves and serve.
This has Taste and is a Treat.
Posted by abbas at December 05, 2010