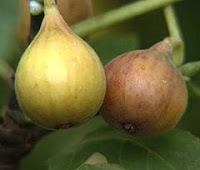 FIGS, ANJEER (FICUS CARICA)
Figs (anjeer in Arabic and Urdu) are related to the banyan tree (Ficus bengalhensis) and are in the mulberry family, although they are not closely related. There is also a wild variety of fig which grows in Pakistan's Punjab province and is called the Punjab fig. We have one on our roof thanks to a small bird we once rescued. The fig is believed to be indigenous to western Asia, (Iran, Syria and Turkey) and was taken by early humans to the Mediterranean areas where they flourished. The Greeks got their figs from Caria in what was then Asia Minor, and improved them until they were considered the best in the ancient world. Greek figs were so renowned in the ancient world that there was a law which forbade the export of the best figs. Greek athletes had a diet full of figs and so did slaves in ancient times, as they provide us with energy.

Pliny writes that he knew of 29 varieties of fig, now there are approximately 800 varieties. He praised those that came from Herculanaeum, Tarant and Caria and archaeologists found dried figs in Pompeii and wall-paintings with them in, along with other types of fruit. The fig was dedicated to Bacchus, the Roman god of wine (Greek equivalent Dionysus) and used in religious ceremonies. It was believed by the Romans that Saturn discovered the fruit, although the Greeks had other myths about its origins.
The Roman writer Ovid tells us that gifts of figs were traditionally given on the first day of the new year, and the legend has it that the wolf that suckled Romulus and Remus, the founders of Rome, rested under a fig tree.
In Greek mythology, the fig was associated with the satyr Priapus (the figure portrayed on modern Greek postcards with a huge erection and half goat and half man), who symbolized sexual desire. Another myth says that one of the eight Hamadryads, Syke, the daughter of the forest spirit Oxylos, was the nymph of the fig tree. These nymphs lived on Mount Oita in Phthiotos according to myth. Another myth says that Sykeus, one of the Titans who went to war with the gods had to flee the wrath of Zeus, father of the gods, and was changed into a fig tree by his mother Gaia (the Earth) and so hidden from Zeus.
Figs are mentioned in many places in the Bible and the Qu’ran, and in the bible Adam was said to have hid his nakedness with a fig leaf.
Fresh figs may be black or green, but the black ones taste better, although they may be difficult to find.

Figs are reputed to be aphrodisiacs and have a high potassium content as well as containing the vitamins A and C, and some of the B-complex ones including  niacin, riboflavin, thiamin, as well as having calcium, iron, phosphorous, manganese, sodium and chlorine plus traces of selenium. They also have Omega-6 oil and the highest fibre content of any fruit. This means that they are a mild laxative, and good to help prevent colon cancer and piles, and can help with weight loss. They may also help prevent post-menopausal breast cancer. They are also to control blood sugar levels as they are high in potassium, so are good for diabetics. The low sodium content and high potassium levels present in the fruit means that they are good at preventing hypertension, and they help halt macular degeneration, so are good for the eyes. They also heal and protect sore throats as they have a high mucilage content. They can aid digestion and are good if you have a fever, and help relieve respiratory problems such as whooping cough and asthma. Syrup of figs is taken as a laxative and some cough medicines are made from them. The best dried figs these days are reputedly the Elemi ones from Turkey, but this is a matter of taste. In traditional medicine in the Indian subcontinent, they are used to treat STDs, liver complaints as well as earache, boils and abscesses. The milky sap from the leaf stalks is used to remove warts. They are rich in antioxidants which combat the free radicals in the body which damage cells and may cause cancer.
The fruit of the fig is made up of hundreds of flowers which grow inside the skin of the fruit. They are pollinated by a wasp with which the fruit has a symbiotic relationship. The seeds are all from the flowers, each of which contains only one seed, so the fig is a very unusual fruit.
CHICKEN WITH FIGS AND PORT

Ingredients
3½ lbs skinless, boneless chicken breasts
1 tsp coriander seeds, dry fried and then ground
1 tsp cumin seeds, dry fried and ground
½ tsp cayenne pepper
10 garlic cloves sliced
2 onions, sliced
2 bay leaves, torn
12-15 fresh figs, washed and halved
1 cup ruby port
1 lemon or 3 Indian/Pakistani lemons, juice and grated zest
½ cup fresh parsley or coriander, shredded
Method
Preheat oven to 350 degrees F.
Rub spices into the chicken pieces then place in a roasting pan. Put the sliced onions, garlic, figs and bay leaves on top. Cover with a lid or foil and bake for 50 mins.
Remove from the oven and stir in the lemon juice and zest. Put bake in the oven without covering and bake for a further 10-15 mins until the chicken is really tender.
Remove from the oven sprinkle with parsley or fresh coriander leaves and serve on a bed of rice.
This has Taste and is a Treat.
Posted by abbas at December 02, 2010