BER, JUJUBE, ZIZYPHUS VULGARIS
Ber is the Urdu name for the fruit of the tree Zizyphus vulgaris, or mauritania or sativa and is called the jujube berry in English. It is also known as the Indian jujube or Chinese date. It has a brownish skin when ripe and smells a little like hops, with an astringent taste. These trees are believed to be native to Syria, but there is some evidence that they are also native to the Indian subcontinent.
In Pakistan the fruit can be found in the month of December, and it is sold then fresh, but can also be dried. In Europe the fruit was made into a cough medicine and tisane for medicinal reasons in times past.
In India the tree is sacred to Shiva and is known as “the tree which removes sorrow”, perhaps because of its sedative properties. It was depicted in the Ramayana so has been known for centuries in the subcontinent and was not a recently introduced species.

In Pakistan there are metaphorical uses for ber as they say that if you have a quarrel with a relative or close friend you should go and talk it over as a relationship is not like ber.  If you leave the person you quarreled with alone for some time the rift will widen between you. If ber fall to the ground they are not damaged but the fruit gets better, and if you smooth things over after a quarrel the relationship will get better like the ber.
It is also said that if there are marriageable daughters in a house then suitors will come just as surely as if there were a ber tree and stones will come as the children try to knock the fruit off the tree.

The fruit has been used in traditional medicine as an emollient, expectorant, coolant, anodyne and tonic and has been used as an antidote for aconite poisoning. It is given to relieve abdominal pains during pregnancy and can be applied to wounds when used in a poultice.
The leaves can be used as a laxative and for throat problems as a decoction and the same liquid can also be used for skin problems. The roots have wound healing properties too.
Medical researchers have found a “new” flavonoid in ber called zivulgarin and trials are underway to discover how it might benefit us. Oleamide found in an extract of Zizyphus jujube has been found to help fight Alzheimer’s disease, and help the cognitive processes.
Wood from the trees is used by villagers to make agricultural implements as it is hard and durable, while the leaves are used as fodder for sheep and goats, so all parts of the tree are useful and well utilized. 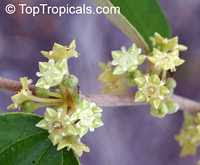 It has been found that there is saponins in he leaves and vitamin C in the form of ascorbic acid in the fruit, as well as the B-complex vitamins, thiamin, riboflavin and pectin. It has immunostimulant, antioxidant and wound healing properties, and pectin is known to be useful in cases of diarrhoea. The fruit also helps lower cholesterol levels and blood pressure. Some of the triterpenoic acids isolated from the fruit are also believed to be useful in fighting cancer and HIV.
Personally I don’t like these fruits, but as they are so good for us, I might try one or two again.
Posted by abbas at December 12, 2010