GREAT MULLEIN, VERBASCUM THAPSUS
There are about 250 species of mullein, which is a relative of the foxglove, toadflax and antirrhinum (snap-dragon) among a whole host of other plants.It is a member of the Scrophulariaceae of figwort family of plants. It can grow up to 6 feet tall so is distinguishable in the wild especially with its clusters of yellow flowers. It is also grown in gardens for its ornamental value. The flowers can be different colours depending on the species of mullein, and can be orange, rust coloured, purple, blue or white. The leaves and the stalk are covered with fine hairs which irritate the mouths of grazing animals, which leave it to itself. It’s a bee plant and birds love to eat the seeds in the autumn. It is native to Europe and Asia, and has been naturalized in North America, where the Native Americans soon learned of its medicinal properties especially valuing it for curing respiratory ailments.The leaves are big and hairy and can grow up to 2 feet across. In the Mediterranean region you can find the most species of mullein. 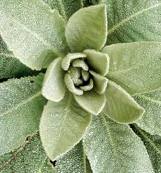 Dioscorides mentions it as good for respiratory diseases, and the Roman General, Agrippa believed that its fragrance could overpower demons. In Europe and Asia it was believed that mullein could protect from evil enchantments and spirits. Ulysses or Odysseus used it to protect himself from Circe’s bewitching powers, according to legend.
The dried leaves are highly flammable and have been used for kindling, candle and lamp wicks and tapers. These usages have given rise to some of its local names, Candlewick plant, Our Lady’s Candle and Hag’s Taper. In 1575, writing in his “Niewe Herball”, Lyte says that the plant which he calls Our Lady’s Candle, is called so because “the whole toppe with its pleasant yellow flowers sheweth like to a wax candle or taper cunningly wrought.” It is called Hag’s Taper because it was thought that witches used it as wicks for their candles used when they cast their spells. The Latin name of this plant family, verbascum, is thought to have come from a corruption of barbascum, from barba meaning beard, referring to its hairiness. Its has many other names and may be referred to as Shepherd’s or Jacob’s staff, because of its height, Feltwort, (because the hairy texture feels a little like the material felt), Clown’s Lungwort (it helps with lung congestion), White Ice leaf (its hairy appearance makes it look as though it is covered in frost), Hare’s Beard and Blanket Herb, are some of these.
Apart from using it for burning, it has also been used as insecticide as its leaves contain rotenone, and the fibres have been made into insulation material. It can be made into a yellow dye by boiling the flowers in water and if it is used with diluted sulphuric acid this produces a permanent green dye; if alkaloids are added to the liquid this will produce a brown dye. If you want to have golden tints in your hair then gather the yellow flowers and add a pint of boiling water and leave them to steep for at least 30 minutes then use the water to rinse your hair after shampooing and rinsing in ordinary water. This infusion of flowers can also be used to clean minor cuts and grazes, and you can also use it as a facial cleanser.
Pick the flowers and put them in a glass jar filled to the top with them, then add olive oil and leave them to steep in a warm place, with the jar firmly sealed, for 2 weeks. You can use this oil (strained) and use a drop or two for earache, bruises or frostbite. You can add beeswax to the oil and use it to soothe a baby’s nappy rash and for sensitive skin.
The leaves are best harvested in the first or second year in the autumn, but if you are collecting them from wild mullein, make sure the stem is not crooked; if it is this means that the soil contains chemicals, so avoid such plants for medicinal purposes. You can dry the leaves and smoke them in a “cigarette” to relieve asthma, lung congestion and hay fever, as well as other respiratory problems. These are also good to get rid of coughs. They can be used in poultices and applied externally on sunburn, ulcers, tumours and piles.
Gerard the English herbalist writing in the 16th century noted that “Figs do not putrifie at all that are wrapped in the leaves of Mullein”, so the antibacterial properties of the leaves were noted very early on.

The whole plant has a narcotic and sedative effect, and the seeds which contain saponins have been used as a narcotic. Saponins have anti-inflammatory properties, and the leaves also contain powerfully active glycosides, and are used for their demulcent and astringent properties. They are mucilaginous too, as they contain a type of latex which has soothing properties. The decoction in milk which is made from them is effective in the treatment of diarrhoea and it strengthens the bowels. To make this you will need an ounce of dried leaves or the same number of fresh leaves, and 1 cup of milk. Boil the leaves in the milk for 10 minutes, then strain and drink 3 times a day with or without sugar or honey. If you boil the flowers with this, it will taste less bitter, and you can also add the leaves of Sweet Cicely to it. This stops coughs and helps with colds. For internal bleeding this is also said to be good.
In Ayurvedic medicine the following is used for treating yeast infections such as thrush: - cayenne pepper, garlic finely chopped, white oak bark, mullein flowers and marsh mallow leaves, crushed and made into a soft ball which can be easily digested.
The tisane is good for coughs, colds and respiratory problems. You should take a wineglass full 3 times a day. In Ayurvedic medicine it is used to allay anxiety and stress.
The tisane will provide you with vitamins B2, 5 and 12, D, choline, beta-carotene,and the minerals iron, zinc, calcium and selenium among other constituents.
MULLEIN LEAF TISANE
Ingredients
1 tbsp of dried leaves or root or two fresh leaves
1 cup water
dried flowers of mullein
1 clove
½ inch piece of cinnamon
Method
Boil all the ingredients together for 10 mins then strain through a piece of muslin or other fine cloth so that the hairs do not get into your mouth and cause irritation.
This has Taste and is a Treat.
Posted by abbas at December 20, 2010

Email ThisBlogThis!Share to TwitterShare to FacebookShare to Pinterest
Labels: MULLEIN