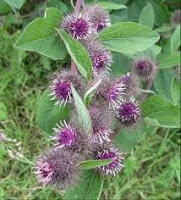 BURDOCK, ARCTIUM LAPPA
Burdock is a very common weed in the British Isles and is native to Europe and northern Asia, although it is widespread in North America too where it has been naturalized. It has been used in traditional medicine for centuries, but also makes a good drink when mixed with dandelions. The recipe below is for a soft drink, but beer or mead can be brewed from burdock and dandelion roots too. In Wales, dandelion and burdock was a popular soft fizzy drink.There is a legend dating back to the 13th century in which it is said that while in prayer, God told St Thomas Aquinas to make an elixir of the first ingredients he found, and these happened to be dandelion and burdock
Burdock is a member of the thistle family, and donkeys love it. Remember Eeyore in Winnie-the-Pooh stories? He loved it. Burdock has seed pods, burs which stick to sheep’s wool and people’s clothing, in the same way that those of agrimony do. Whereas agrimony was known as philanthropos, burdock was called Philanthropium, presumably to distinguish it from agrimony. The name Arctium comes from the Greek, arktos meaning bear, and is thought to refer to the brown hairy bur looking a little like a bear’s coat.

Burdock is mentioned in literature form North America and Europe attesting to its prevalence. Here are some examples: Shakespeare refers to it in “Troilus and Cressida” when Pandanus says “They are Burs, I can tell you, they’ll stick where they are thrown.”
In “King Lear”: -
“Crown’d with rank Fumiter and Furrow-weeds,
With Burdocks, Hemlock, Nettles, Cuckoo-flowers”
In “As You Like It”: -
" Rosalind : How full of briers this working day!
Celia:        They are but burs, cousin, thrown in holiday foolery. If we walk not in the trodden paths, our very petticoats will catch them."
Children love to throw the burs on adults clothing still so that they are unaware of their presence until they get home.

These plants are also mentioned in Hans Anderson’s Fairy Tales, in “The Happy Family”,
“The burdock never grows alone, but where there grows one, there always grow several, it is a great delight and all this delightfulness is snail’s food.”
In contrast the American writer, Nathaniel Hawthorne says this of them:
“…a grass-plot, much over-grown with burdock, pig-weed, apple-pern and such unsightly vegetation…” (The Scarlet Letter, chapter 2)
However George Eliot has this to say about them in chapter 12 of her famous novel “Middlemarch”:
“…the great oak shadowing a bare place in mid-pasture; the high bank where the ash-tree grows, the sudden slope of the old marl-pit making a red background for the burdocks.”
In the Middle Ages these were valuable plants and the seeds were used to get rid of kidney stones in the belief that seeds, being hard and needing to be pounded could counteract the gravel in the organs.

The stalks of the burdock plant can be peeled and eaten raw in a salad tossed in oil and wine vinegar, like the stalks of the Globe artichoke. They can also be cooked after peeling and used as a vegetable. (They taste a little like asparagus.) They are eaten in parts of Europe and Japan. They contain inulin and dietary fibre as do the leaves which can also be boiled and eaten as a vegetable. The stalks used to be candied and used like angelica.
The plant has antioxidant, antibacterial and anti-inflammatory properties and medical trials have shown that it has “prebiotic properties that could improve health” (University of Maryland centre for alternative and complementary medicine).
You can make and infusion of the root which is best harvested in July, and dried, using 2-6 grams of root to 500 mls boiling water and allowing the root to steep in the water for 15 minutes before straining and drinking 3 times a day for skin problems such as acne and eczema. You can also use this on the skin, but not on open wounds.
You can make an infusion of the leaves (pour boiling water over them and leave to steep for 15 minutes) for stomach problems and an infusion of the seeds has been used to treat kidney problems and nervous disorders. Culpeper recommended the leaf juice or latex from the roots to be drunk in “old wine” for snake bites, and the bruise leaves mixed with egg white for burns. The bruised leaves can be made into a poultice for skin problems but not for open wounds.
The Chinese use this plant in traditional medicine for cancer, barrenness, erectile dysfunctions and an aphrodisiac.
The recipe below is rich in vitamins A and C.
DANDELION AND BURDOCK DRINK

Ingredients
2 tsps ground dandelion root
2 tsps ground burdock root
2 star anise
1 inch ginger root, finely chopped
3 pints water
Method
Boil all the ingredients together for half an hour.
Cool and bottle.
Use as a cordial and add soda water for the extra fizz.
You can also add orange juice and zest to the cooking water but this is the traditional recipe. You can experiment with other fruit once you have tasted it. It should look like cola.
This has Taste and is a Treat.
Posted by abbas at December 21, 2010

Email ThisBlogThis!Share to TwitterShare to FacebookShare to Pinterest
Labels: BURDOCK