COMMON NETTLE URIOTICA DIOICA
The Common Nettle or Stinging Nettle is native to the temperate zones of the world and is common in Britain, India, Pakistan, South Africa, Australia and many other countries. Some believe that it may be a naturalized plant in Britain, introduced by the Romans who, knowing it was cold in Britain, took stinging nettles with them and used them to get warm in winter by beating their legs with them. The nettle is a unique plant in that if you get stung by one and then deliberately put a nettle on the stinging part, it lessens the stinging sensation. However, as Dock leaves usually grow near nettles, at least they do in Britain, you can put a dock leaf on the sting and this gives rapid relief. Mint, sage and rosemary leaves have the same effect.
However much the nettle hurts in Britain and Europe, other nettles are far more horrendous. A species native to Java Uriotica urentissima, gives a sting, the effects of which can last for a year, and may, it is said, be fatal. In India Uriotica crenulato and Uriotica heterophylla are also best to avoid.

In the past nettles have been used to relieve painful muscles, joints, eczema, arthritis, gout and anaemia. Some of the remedies included beating the nettle on the sore place, which probably served to give the patient some other pain to think about. They sting because they have fine hairs on the stalk and leaves, and these contain chemicals which when released cause irritation to the skin.
Today they are used as a diuretic, and to help urinary problems associated with an enlarged prostate gland (benign prostatic hyperplasia or BPH), urinary tract infections, hay fever, or in compresses for treating joint pain, sprains and strains and insect bites. Fresh nettles make good insect repellents. Recent medical trials suggest that they may help lower blood sugar levels and blood pressure. The parts used are the stem, leaves and roots, although the seeds have been used too. Nettles should be avoided when pregnant.
A tisane can be made with 2/3 cup of boiling water poured over 3 to 4 teasponns of dried leaves or root. Allow the plant to steep for 3 to 5 mins, then strain and drink, sweetened with a little honey. You can also use fresh leaves, but leave to steep for 10 minutes. You should drink water after drinking the tisane.
The plant contains vitamins A, B and C and lectins which seem to stimulate the immune system. The tisane has been used to dispel gravel from the kidneys and stimulates the function of these and the bladder.
Nettles have been used to make cloth and this was used in German army uniforms in the First World War, when cloth was scarce in Germany. It has been made to weave coarse fibres for cordage, sacks and sailcloth. Nettles can be made into beer, and the flowering tops used to be made into country wine.

The young tops are best used for cooking and should be harvested when they are 6”to 8” tall. You need to harvest these wearing protective gloves, and then wash them thoroughly under cold running water, and throw them in a pan, while they are still wet, cover and simmer for 20 minutes. Remove them from the heat and roughly chop them, and blend them with salt and freshly ground black pepper. You can put poached eggs on top of them for a tasty light lunch. The leaves have a nutty flavour. They have a slightly laxative effect though, so don’t eat too many.
In Scotland they make nettle pudding, by using a bucket full of young nettle tops, 2 chopped leeks and broccoli heads, and ¼ pound of rice. You put the vegetables together in a layer in a muslin bag then a layer of rice and repeat the layering until the ingredients are used up. Then tie the bag and boil for 30 minutes and serve with melted butter.
An infusion of fresh leaves can be helpful for burns, but you can dry nettles, by picking them on a sunny morning and tying them in bunches of 8 to 10 in a fan shape and hang them in a sunny spot to dry so that the air can penetrate the nettles. When dry, store in airtight tins or powder them and store in airtight jars. You can also dry the flowers and seeds by spreading them out on paper in the sun. 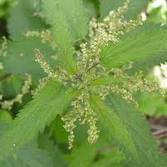 The juice from the leaves can be used with a little honey or sugar for asthma, or sufferers can burn the dried leaves and inhale the smoke. The seeds and flowers were given in wine to relieve fevers. This was also given as an antidote to poisoning by hemlock, nightshade and Henbane, as well as for snake bites, and those of rabid dogs.
Nettles have also been used to prevent hair loss and promote growth. To make the hair tonic, you need 2 pints of water and a handful of young nettles. Simmer them for 2 hours, strain and bottle when cold and saturate the scalp with the liquid every alternate night. You can also comb expressed nettle juice through your hair to stimulate new growth and keep hair shining and healthy.
NETTLE SOUP
Ingredients
1 lb potatoes, peeled and chopped
½ lb young nettles washed and roughly chopped
2 oz butter
1½ pints chicken stock
salt and pepper to taste
small pot of natural yoghurt
Method
Boil the potatoes for 10 mins in salted water. Drain.
Melt the butter and add nettles and fry for a few minutes. Add the potatoes and chicken stock and bring to the boil. Simmer for 15 mins or until tender.
Remove from the heat and blend all ingredients together.
This has Taste and is a Treat.
Posted by abbas at December 22, 2010