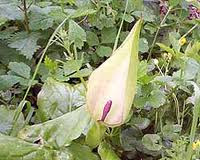 THE CUCKOO PINT, ARUM MACULATUM
The Cuckoo Pint may or may not be native to the British Isles, but it grows wild there and is often seen under hedges. It likes moist ground and shade, and has an attractive flower and berries, which are poisonous. The whole plant should be treated with caution as the sap from the plant causes a burning sensation and this lasts for hours. If you use the root then wash all utensils in boiling water afterwards.
This plant is the only one of the Arum family to grow wild in Britain, and its leaves are among the first to emerge in spring. They are a glossy shade of green with purple blotches on them and the flower can also look stained with purple. It is said that these flowers grew under the cross of Christ and caught some of his blood. In this way they are the Holy Grail or Chalice of the British hedgerow.
In the past children used to play a game to see which flower was first, the Lord or the Lady, differentiated by the colour of the stamens. That is how it came to have the name Lords and Ladies.
Another name for it was Starchwort as its starchy tubers were used in Elizabethan times to starch the elaborate cuffs and ruffs that were so fashionable in the Renaissance. Gerard commented that the hands of the poor laundresses who used this root as starch were chapped and blistered because of it. 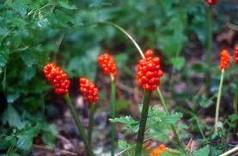 Rural people say that the name is really Cuckoo’s Pintle or Pintel, meaning Cuckoo’s Penis, but there are several other ‘reasons’ given for the name too.  There are several pubs with the name “Cuckoo Pint” and the landlords of each will give different explanations for the name. Young girls used to be told not to touch the cuckoo pint or else they would become pregnant.
In Germany there is an old superstition that if a young man goes to a dance he should put a little of the plant into his shoe and say the following words “I place you in my shoe; let all young girls be drawn to you”. In this way he could have the dancing partner of his choice, whatever the male competition.
Dioscorides in the first century AD wrote that the leaves of the cuckoo pint were “excellent” eaten cooked as a vegetable. However the tuber is more frequently eaten as it has a high starch content and is like a potato. Care should be taken gathering the tubers though as the juice will cause a burning sensation and blistering. The tubers can be dried and then heated and ground to a fine powder. This was known as Portland Powder and was used as arrowroot is, but it was supposed to be an excellent treatment for gout.
This powder was one of the ingredients of Poudre de Cypre (Cyprus Powder) used by fashionable Parisian ladies as a cosmetic, presumably to whiten the skin. The starch has to be washed copiously however to get rid of any toxins which irritate the skin. The tubers have a milky juice in them which needs to be got rid of before use. Drying then heating them gets rid of their acridity.
After the root has been dried and baked, it can be eaten or the flesh can be pounded in a mortar to a powder and stored for future use in airtight jars in a cool dry place. The powder is a diuretic and stimulant.
The American variety of this plant is Arum triphyllium or Dragon root also called Jack-in-the–Pulpit, or wild turnip. There are many arums all over the world which have the same toxicity as the Cuckoo pint, so all should be treated with caution. 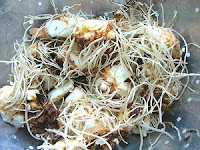 Taro, comes from the Calocasia antiquorum variety of Arum which is a close relative of the cuckoo pint. This is the tuber of the plant which is used like a sweet potato, in Hawaii and the Pacific islands. (Another name for it is Arum esculentum.)
Calocasia macrorhiza, found on the Indian subcontinent is the plant from which gingili oil is obtained, and used in the treatment of intermittent fevers. It is obtained from the root of the plant. Another member of the Arum family is Arum montanum which also grows on the subcontinent, and the root was once used to poison tigers.
You can use the dried powder of the cuckoo pint tuber to make bread and biscuits, instead of flour, but unless you are really strapped for cash it is inadvisable given the toxicity of the plant.
Posted by abbas at December 29, 2010