SPANISH FLAG, YELLOW SAGE, LANTANA CAMARA
Lantana camara is native to parts of Africa, the West Indies and Central and South America. It has been grown for its ornamental value and has escaped into the wild, so that now it is an invasive species in many countries including Australia, and some in East Africa. There are many different varieties and some of the berries in different countries are highly toxic, for example children have died from ingesting them in Canada. However a recent study (published in November 2010) states that the berries “are not associated with significant toxicity, either ripe or unripe”. Certainly adults in Pakistan tell stories about loving to eat them when they were children. They look and smell a little like blackcurrants, or juniper berries. However, they should be treated with caution.
Animals which eat too much of the plant can be poisoned and die within 3 to 5 days, and this is thought to be due to the lantadene in the plant which is a polycyclic triterpenoid. 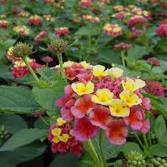 In Pakistan they grow profusely on waste ground and in other countries they take over complete habitats and destroy other vegetation. They are shrubs and can grow up to 6 feet tall although they are normally around 3-4 feet.
Although they are weed, they have many uses, as the stems can be made into pulp for paper-making which is a suitable quality for writing and printing, but it is not yet commercially viable to harvest the stems. Similarly the roots yield a latex which could possibly be used to manufacture rubber, but again, this has to be studied to see if it is financially viable.
In India and Pakistan they are used in folk medicine with the extracts from the plant being used for cancer, chickenpox, measles, asthma, ulcers, swellings, eczema, tumours, high blood pressure, bilious fever, catarrhal infections, tetanus, rheumatism, malaria, dysentery and diarrhoea. The roots are used in a decoction for colds, coughs and flu and gonorrhea. The pounded leaves are used in poultices for swellings and skin problems.

The leaves have antiseptic properties and can be placed on wounds. The essential oil has triterpenes, such as lantic acid which can kill E.coli and Bacillus cereus, as it has potent antimicrobial qualities. The leaf extract is also fungicidal, nermaticidal and insecticidal, so may be a natural way to kill pests and keep them away from crops. The oil also contains verbasocide which is antimicrobial and has immunosuppressive and anti-tumour properties.
The twigs and stems are used in still-developing countries as fuel for cooking, and the flowers attract butterflies and moths as they are a good source of nectar for them.
The best advice is not to ingest any part of this plant, although it probably won’t do you any harm, although this may depend on where you live and the variety of Lantana camara.
Posted by abbas at December 07, 2010