OAK TREES, ACORNS AND OAK APPLES
There are two main genuses of oak tree, the Cyclobalanopsis and the Quercus. The Cyclobalanopsis variety grows in eastern and South East Asia and is an evergreen, whereas the Quercus are the deciduous trees which grow in Europe and North America.
This article deals with the Common oak, Quercus robur, found in the British Isles. The name Quercus comes from “quer” meaning beautiful and “cuoz” meaning tree and the drus in Celtic means tree and more specifically the oak, thus giving rise to the word druid.
The fruit of the oak tree, the acorn, was used as food when we were hunter-gatherers, although they are now more commonly fed to pigs. The oak tree has special significance in Britain, and was a tree that was sacred to the Druids, those Celts who inhabited what is now Brittany, France, Wales and Cornwall in Britain and other places in Europe. The Druids were the priestly caste who revered the oak as the King of Trees, all of which had their own special significance. Druids believed that mistletoe which grows on these stately trees was a gift from the gods, and used it as well as all parts of the tree in medicine. They worshipped in sacred groves, and groves of oak were the most highly venerated. “Druid” means “knowing the oak tree” and the parasitical plant, mistletoe was known as the “universal healer.” The oak was also thought to be a gateway to other realms and so was important in the shamanic ceremonies or the Druids.
Oak leaves were a status symbol of the Celts, Romans and ancient Greeks and chaplets of oak leaves could only be worn by those deserving such a high honour. The oak symbolizes strength, fertility wealth and good fortune, and pieces of oak bark are still carried as amulets in parts of Brittany.

There are many phrases in English that show the power of the oak, for example, “hearts of oak”, attributed both to the Welsh warriors and the English. Thomas Hardy, writing in the late 19th and early 20th century gave his morally strong hero in “Far from the Madding Crowd” the name Gabriel Oak.
In England there are famous oaks, the Gospel oaks which were outside city walls and under the shade of which preachers read psalms and told moral stories from the gospels to parishioners. These were thought to be safe resting places for weary travellers as it was believed that they would be safe from evil under the shelter of these trees. The poet Robert Herrick (1591-1674) wrote these lines: -
“Dearest, bury me
Under that holy oke, or Gospel tree”.
There is also the Royal Oak in which legend has it that Bonnie Prince Charlie (King Charles II of England) hid after his defeat by Cromwell’s Roundheads after the Battle of Worcester in 1651. Many pubs in England were called “The Royal Oak” because of this legend.
There is also an old rhyme which predicts the weather in spring: -
“If the Oak’s before the Ash,
Then you’ll only get a splash;
If the Ash before the oak,
Then you’ll get a soak.”
In other words if the oak grows new leaves before the ash tree does, it won’t be a very wet spring, but the opposite will be true if the ash starts to grow new leaves before the oak tree does.
One superstition about the oak tree is that if someone cuts one or damages the tree in any way, their first born son will die young.
May 29th is Oak Apple Day in England, called “shikshak” day in Hampshire in southern England. Oak apples are the larvae of the cynip insect and these have astringent qualities due to the gallo-tannic acid they contain. A decoction made from these or from the bark of the oak tree is said to stop internal bleeding. The powdered oak apples used to be mixed with benzoated lard and applied to bleeding gums and piles as well as being employed to stop nosebleeds.
The bark of the oak tree can be used in a decoction for various ailments including prolapse of the lower bowel. You can make the decoction with 1 ounce of bark to 2 pints of water. Boil these together until the liquid is reduced by half. The water can be used as an effective gargle for sore throats, applied to bleeding gums or haemorrhoids (piles). Powdered bark can be used as snuff and this was used in the early stages of consumption to cure it. It is supposed to be good for respiratory ailments. The decoction of the bark is a tonic, astringent and antiseptic, so can be applied to cuts and wounds. It has also been used with chamomile flowers as a substitute for quinine for fever. The leaves from the oak tree have been applied to fresh wounds to staunch the bleeding.
The fruit of the oak tree, the acorn, has been used as a coffee substitute in the past, and you can eat these as long as the tannic acid they contain is leached from them. This is easy, if time-consuming, but you can keep the water and use it for a variety of ailments, including as a skin wash for rashes or irritated skin, as a drink to stop diarrhoea and dysentery, and to put on fresh wounds as it has antiviral and antiseptic properties. 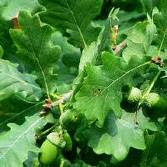 Boil the acorns in water and after 10 minutes, strain the acorns and put them in another pan of boiling water. You need to do this twice more to be sure there is no tannic acid remaining. Store the water in the fridge and if it grows mould just reboil it to get rid of the mould and continue to store it for medicinal use.
Now that the acorns are tannin free you can easily peel them and dry or roast them. Roasted acorns make good tisanes or coffee if you add chicory. You can grind the acorns into flour and use it for bread or to thicken sauces. Alternatively you can toast the kernels and cover them with honey for a tasty snack, or make them into a simple homely porridge in the winter months.
You can even use the water from this process to make a dye, but will have to use a mordant if you want a permanent colour. If you have your own animals you can use the water in the tanning of the skin to make it soft and flexible.
The oak tree is loved by truffle-hunting pigs in Piedmont Italy and the Perigord region of France, as the ultimate fungal delicacy, the black truffle, can be found under oak trees.
The oak tree has been around for thousands of years as was verified when scientists discovered that the Jurupa oak in California, has been in existence for at least 13,000 years making it much older than the ancient pyramids of Egypt. They believe that it regenerates itself as what looks like a grove of trees has been genetically tested to reveal that it is, in fact one single tree. It is the oldest living organism on the planet that has been discovered so far, and was recognized as such only in 2009.
Posted by abbas at December 11, 2010