AFRICAN SPIDER FLOWER, CAT’S WHISKERS, AFRICAN CABBAGE, CLEOME GYNANDRA
This plant is not related to the Caribbean cat’s whiskers plant, but is more closely related to a cabbage, its DNA analysis has shown, so it was moved from the caper family, Capparidaceae or Cappariceae to one of its own recently, and is now in the Cleomaceae family.
Its true origins are unknown with some claiming it is an African plant, while others believe it originated in . Whatever the case is now grows throughout the tropics and subtropics. It grows to approximately four feet tall and comes into leaf in May, flowers during the months of July and August with its seeds ripening in August and September.

It is used as a leafy green vegetable and as medicine. The leaves are rich in the minerals calcium and potassium, and it also contains iron, copper,  magnesium, sodium and zinc. It also contains vitamin C in the form of ascorbic acid and beta-carotene. Its flavonoids (rutin, quercetin, luteolin, hesperidin and so on) are thought to be responsible for the anti-inflammatory and antinociceptive actions of the plant.
The seeds produce an edible oil which consists of palmitic, stearic, linoleic, oleic and arachidic fatty acids. This oil is easily extracted and does not need refining before use. The residue or seeds cake is used for animal fodder. It is hoped that because the plant can grow in arid conditions, it could help supply some of the world’s food if global warming continues.

Apart from the names listed above for this plant it is also called bastard mustard, and its oil has similar properties to mustard oil, and the seeds can be substituted for mustard seeds. It is used to get rid of head lice both in India and Africa.
In traditional medicine systems it has a whole host of uses, with the leaves having counter-irritant properties. These are used in poultices or applied to relive the pains of rheumatism and arthritis, although one should use them with care as they can cause the skin to blister.
The juice expressed from the leaves is used for earache and epilepsy, in traditional African medicine systems. In , women chew the leaves with betel nut, to improve their fertility.
In the leaves are blanched and sun or air dried and stored for the rainy season when they can be sold in markets. The fresh leaves are also sold in markets in the growing season, and these balls can be stored for up to a year. They are reconstituted in water and then boiled and eaten like spinach. Like the South African foxglove this plant is classed as a vegetable. 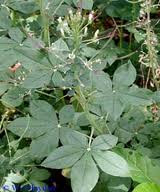 The tender young leaves and shoots are best as a vegetable as the older leaves can be bitter. These have to be boiled and the water discarded. In some parts of they are then mixed with peanut paste which enhances their flavour and lessens the bitterness of the leaves. The tender leaves and flowers can be made into sauces and added to stews.
The boiled leaves are given to pregnant women and are eaten before and immediately after childbirth. It is said that they help to make the birth easy and they help in loss of blood. They are also given to warriors who have lost blood. An infusion of the leaves is given for anaemia.

Infusions of the chopped roots are used for chest pains, and an infusion of the leaves is used to stop diarrhoea. One cupful of the root infusion is given to ease childbirth.
The seeds can kill fish so they are scattered into lakes and other bodies of water so that the fish rise to the surface. However, they can also be used to feed domestic birds and poultry. These plants are useful insect repellants and are intercropped with cabbages and other brassicas so that they are not overly disturbed by insects. Both the stem and leaves have insect repellant properties, with the leaves being particularly useful to keep blood-sucking tics away.

Leaves are used for genitor-urinary problems such as cystitis, as well as to boost the immune system; research is being carried out into their possible use against HIV and their antibacterial properties.
In the Indian subcontinent the plant is used in Ayurveda as a decoction or infusion of the roots or an infusion of the boiled leaves to get rid of intestinal worms, for ear problems, gastro-enteritis, and other similar problems; the oil is used on tumours and for enlarged prostate glands. A decoction of the root is used for fever, including malaria, and the anti-inflammatory properties of the leaves make them useful in the treatment of pink eye (conjunctivitis).

In “Review on Cleome gynandra” by Mishra S.S. et al., in the International Journal of Research in Pharmacy and Chemistry, 2011, Vol. 1 (3) pp. 681-9,  it is reported that the plant is given for lowering blood pressure by the traditional healers of the area, while they prescribe the roots and leaves for the treatment of diabetes. The leaf extract has free radical scavenging abilities, and a methanol extract of the plant has shown anti-cancer activities. There is a little evidence that the plant may be useful in the future treatment of Alzheimer’s disease and other cognitive and age-related memory loss diseases, and it may help in treating diabetes, heart problems, kidney problems, ulcers, and many other ailments. 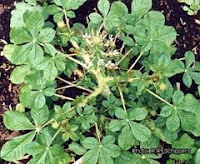 Yet another study reports: -
“These results demonstrate that the plant extract has no harmful effect and exerts in vivo anti-inflammatory properties against adjuvant-induced arthritis.”
(“Anti-inflammatory activity of Cleome gynandra L. on hematological and cellular constituents in adjuvant-induced arthritic rats.” In Journal of Medicinal Food Vol. 8 (1) spring 2005 pp. 93-99, Narendhirakannan RT, Kandaswamy M, Subramanian S.)
It would seem that the African Spider Flower plant has many health benefits for us although more research is needed into it.
Posted by abbas at July 02, 2012