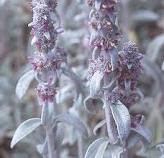 LAMB’S EARS, WOOLLY BETONY, STACHYS BYZANTINA
As a member of the Stachys genus (there are between two and three hundred species in this genus) Lambs’ ears or woolly betony is related to wood betony (Stachys officinalis).A synonym for this genus is Stachys lantana.
It gets both names because of the silky grey or white hairs that cover the aerial parts of the plant. It is a member of the Lamiaceae or Labiatae family or mint family, making it a relative of to purple, yellow and white dead nettles, marsh woundwort, the teak tree, marjoram, basil, Holy basil, oregano, savory, thyme, lavender, lemon balm, Scarlet bee balm as well as bugle, motherwort, self-heal, catnip, the chaste tree, the small-flowered chaste tree, sage, ground ivy, Jupiter’s sage, wall germander, horsemint, Fragrant premna and hyssop along with many other plants.

In the past its leaves were used as a bandage to staunch the flow of blood from a cut and it is reportedly good to stop the pain of a bee sting. Other betony plants were used much more extensively than this one it would seem, as it has been cultivated in temperate parts of the world for centuries. It has more importance in the traditional systems of medicine in the countries to which it is native, no doubt, and those are , and .
It flowers in June through to September, and has white or pink or mauve flowers. It is an evergreen although it might die back if the winter is a particularly cold one.

It has been discovered that the aerial parts of lamb’s ears have antioxidant, antibacterial and antimicrobial properties, so this supports its use as a wound healer. Phenolic compounds have been found in it along with tannins and flavonoids. Its essential oil is rich in sesquiterpenes for example a-capaene and spathulenol, both of which are used in the perfume industry, and beta-carophyllene which is also a component of clove oil. This last substance is a dietary cannabinoid and the first to be approved by the food and Drug Administration (USFDA) as a food additive. It seems to have a local anaesthetic action and is anti-inflammatory, antibiotic, and according to some studies has anti-cancer properties. 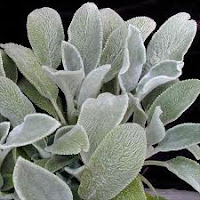 Spathulenol may have immunomodulatory effects, but more research need to be carried out on Lamb’s Ears so that scientists can ascertain what health benefits this plant has to offer us.
Posted by abbas at July 02, 2012