It is a member of the Fabaceae or Leguminosae family of plants making it a relative of peas, green beans, borlotti beans, chickpeas, soya beans, lupins, field restharrow, the Monkey Pod tree, carob, kudzu or pueraria, indigo, alfalfa, broom, Dyer’s broom, lentils, to the pongam tree, the cancer bush (Sutherlandia frutescans)the lead tree or ipil-ipil, the Indian Coral tree, the tree from which we get Gum Tragacanth or gond katira, jhand the mesquite tree, dhak or Flame of the Forest tree, the Pacific teak tree, the ashoka tree (Saraca indica), amaltas (golden shower tree), European laburnum, the Burmese rosewood tree, melilot or sweet clover, milk vetch, the hyacinth bean, the butterfly pea, and many more.
The plant can grow to heights of just over three feet and in the wild likes muddy places near rivers.

It has been mixed with linseed (flax seed oil) as an infusion for sore throats, irritable coughs, laryngitis and other ailments. Powdered along with senna and fennel it was used as a mild laxative. It is mixed with other herbs partially because it makes the medicine taste better and often because of its own medicinal properties.
It is believed that the ancient Greeks learned about the uses of the liquorice root from th4 Scythians and it was known to Theophrastus in the third century BC who believed it to be a thirst quencher (as it is) - chew the root for yourself! He also commented on the different tastes of the different liquorice roots he was familiar with. Dioscorides used it in the first century AD and is believed the first to have written the name “sweet root” for this plant. 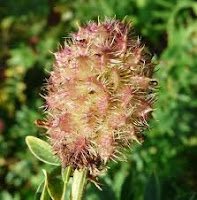 Ancient Roman writers called it Radix dulcis, or sweet root, just as it is in Greek. In the 11th century AD it was a well-known medicine in and was cultivated in . John Gerard had it in his garden in 1592, as did other herbalists of his time. Writing a century later, Nicholas Culpeper says that it grew “in divers place” in “and thereof is good profit made.” He has this to say about how liquorice in general was used in medicine in the 17th century:
“It is under the dominion of Mercury. Liquorice boiled in fair water, with some Maiden-hair and figs, makes a good drink for those that have a dry cough or hoarseness, wheezing or shortness of breath, and for all the griefs of the breast and lungs, phthisic or consumptions caused by the distillation of salt humours on them. It is also good in all pains of the reins, the stranguary, and heat of urine. The fine powder of Liquorice blown through a quill into the eyes that have a pin and web (as they call it) or rheumatic distillations in them, doth cleanse and help them. The juice of Liquorice is as effectual in all the diseases of the breast and lungs, the reins and bladder, as the decoction. The juice distilled in Rose-water, with some Gum Tragacanth, is a fine licking medicine for hoarseness, wheezing, &c.” 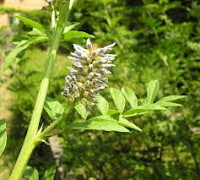 The liquorice root may have liver protective qualities, and may help allergy sufferers. It may also help protect against the development of piles and can be useful as an antibacterial agent (the essential oil). Research is underway to discover how it inhibits the growth of tumours and cancer cells. Liquorice has antibacterial, antifungal, antimicrobial and antioxidant properties. Because of its natural antioxidant properties it can be safely added to food.
The glycyrrhizin in the root is said to be fifty times sweeter than sugar. The dried root was given to infants to help with teething problems.
Posted by abbas at July 02, 2012