BITTER OR ROCKET CANDYTUFT, MEDICINAL PLANT WITH MANY NAMES: HISTORY AND HEALTH BENEFITS OF ANNUAL CANDYTUFT 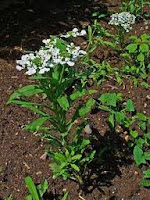 BITTER, ANNUAL OR ROCKET CANDYTUFT IBERIS AMARA
Bitter candytuft is native to western and southern including the . It grows amongst grain crops, such as wheat and oats, although its conservation status is of concern in some parts of . It is a member of the Brassicaceae or Cruciferae family so is related to broccoli, brussel sprouts, kale, savoy cabbage, red cabbage, horseradish, mooli, garden cress, cauliflower, kohlrabi, mustard, field penny-cress, rocket, wallflowers, Dame’s rocket, Lady’s smock, Lamb's ears, wood betony, scurvy-grass, turnips and swede and a whole host of other plants, all of which could be used to prevent scurvy.

All parts of the plant were used in medicine, but the seeds were especially valued. These can also be ground to a powder, and mixed with cold water can form a bitter, pungent mustard substitute. If mixed with hot water or vinegar or salt, the ‘mustard’ that is produced is milder.
The seeds have been used traditionally as treatments for asthma and bronchial problems, and the whole plant has been used against rheumatism and arthritis. It was considered good to relieve flatulence and the bloating that can be caused by the buildup of gas in the system.
A homeopathic remedy is made from the plant to treat those who are nervous and agitated as well as people with liver and heart problems. It was formerly believed to be good for an ‘over-excited’ enlarged heart.

An extract of the plant has shown to have an anti-ulcer effect on animals in vivo, and to soothe the smooth muscles of the smooth intestine and stomach in rats. (Iberis amara L. (bitter candytuft) – profile of a medicinal plant, Reichling J. and Saller R., 2002 in Research and Complementary and Natural Classical Medicine Supplement pp.21-33.)
Bitter herbs have been used since ancient times to aid the digestion process and digestive system, and a herbal preparation was patented in in the 1960s, called Iberogast, which is said to be effective against Irritable Bowel Syndrome, (IBS) and other stomach problems. It comprises extracts of bitter candytuft (from whose genus it gets part of its name), angelica root, chamomile, liquorice root, peppermint, lemon balm, caraway seeds, milk thistle, and celandine.
There is little research into this wild herb, but it is becoming a favourite among gardeners which may be a good thing for its conservation status.
Posted by abbas at July 02, 2012