Dyer’s broom is native to , , and the Mediterranean region and . It may be native to the north eastern , but is probably an escapee, as it was grown as an ornamental. It grows to around two feet tall with a spread of more than three feet. It has narrow pointed leaves and yellow flowers which bloom between June and September. The seeds ripen between August and October. The plant is pollinated by insects and spring open rather explosively when an insect touches them.
The plant is closely related to broom, and is a member of the Fabaceae or Leguminosea family, the pea or bean family of plants. This means that it is related to the pongam tree, the cancer bush (Sutherlandia frutescans) the lead tree or ipil-ipil, the Indian Coral tree, the Monkey Pod tree, the tree from which we get Gum Tragacanth or gond katira, jhand the mesquite tree, dhak or Flame of the Forest tree, the Pacific teak tree, the ashoka tree (Saraca indica), European laburnum, the Burmese rosewood tree, lupins, indigo, field restharrow, carob, melilot or sweet clover, milk vetch, the hyacinth bean, alfalfa, the butterfly pea,  chickpeas, borlotti beans and lentils just to name a few of its relatives. 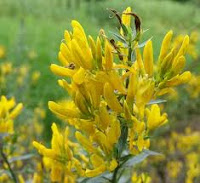 All parts of the plant produce a yellow dye, but the flowering tops produce the best golden yellow one. This was traditionally used to dye woollen cloth and when mixed with woad can produce a green dye, and has been used for dye since ancient times, with both the Romans and Greeks using it.
In 1708 Joseph Pitton de Tournefort (1656-1708) a French botanist, described its use on what is now the Greek in the . He had been sent on an exploratory expedition to the by the King of France, Louis XIV.

However the plant was also used for medicine and in the 14th century was, like broom, included in the ointment “unguentum geniste”. It was recommended for “alle could goutes” and the seeds and flowering tops have diuretic properties as well as being able to provoke vomiting to cleanse the system. They are also fairly strong laxatives, although not as strong as jamalgota (Croton tiglium).
A decoction of the plant used for gout and rheumatism, while the seeds was ground and made into a plaster for broken limbs. In the it was traditionally used to treat mad dog bites or rabies, but there is no scientific evidence to support the use, and neither is there evidence that it worked.

What is certain is that the plant is a good nitrogen-fixer so it can help the soil stay or become more fertile. The leaves are edible and can be used in soups and stews, as a vegetable, while it is said that the seeds can be roasted then ground to make a coffee substitute. The young flower buds can be pickled and used as a capers substitute too. The strong fibre from the stems can be made into coarse cloth or made into ropes.
Care should be taken with the use of Dyer’s broom as it constricts the blood vessels and so increases blood pressure. It should be avoided by those with high blood pressure. It is best to harvest the plant when the flowers are about to bloom and dry it for later use.
A tisane (infusion) of the flowering tops or the whole aerial parts of the plant can be a useful diaphoretic, promoting sweat in fevers, and it is also said to be a stimulant.
Nicholas Culpeper, the English herbalist, writing his Herbal in the 17th century has this to say about dyer’s greenwood or Dyer’s broom: - 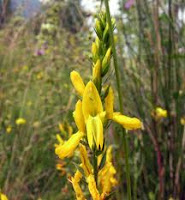 “Government and virtues. Matthiolus says, That the root hereof cures tough phlegm, digests raw phlegm, thins gross humours, dissolves hard tumours, and opens obstructions. Some do highly commend it against the biting of venomous creatures, to be taken inwardly and applied outwardly to the hurt place; as also for the plague or pestilence. The people in some counties of this land, do use to bruise the herb, and lay it to cuts or wounds in the hands or legs, to heal them. “
Interestingly the plant contains genisten which was first isolated from Dyer’s broom in 1899. This blocks the formation of new blood vessels and may block the uncontrolled cell growth associated with cancers, according to some scientists. It has been seen to inhibit the growth of prostate cancer, so perhaps this is a plant to watch in the future.
Posted by abbas at July 02, 2012