BLOOD FLOWER, PERHAPS AN AGENT THAT WILL ASSIST IN OUR FIGHT AGAINST CANCER: HEALTH BENEFITS AND USE OF BLOOD FLOWER

BLOOD FLOWER, MEXICAN BUTTERFLY WEED, ASCLEPIAS CURASSAVICA
This flower is native to the South American continent although it has now spread throughout the tropics and subtropics. It is related to the common milkweed, and is in the Asclepiadaceae family, and is a relative of aak (Calotropis procera).
The genus name Asclepias is in honour of the Greek god of medicine, Asklepius or Asklepios, who was the son of Apollo, but who was brought up by Chiron the centaur who trained him in the art of medicine. Unfortunately Asklepius angered Zeus the Father of the gods because he upset the balance and natural order of nature by bringing the dead back to life. He was killed by Zeus’ thunderbolt and became a constellation. Because of this association with the god of medicine, we understand that the genus was considered to have medicinal properties by ancient peoples.

The beautiful flowers of this plant attract the Monarch butterfly which lays eggs on it and also hummingbirds. The different coloured flowers on the same flower head remind me of those of Yellow sage or Spanish Flag,(Lantana camara). The flowers bloom between June and October, giving way to downy seeds.
The sap from these plants can cause dermatitis, but diluted and used to get rid of intestinal worms. It is poisonous if ingested. Although the plant is not native to the Aborigines there use it to kill fish and believe it to be a love charm.

The roots are used in traditional medicine systems for their anodyne (pain relieving properties) and extracts of the roots have been shown to have antimicrobial, antifungal and antibacterial. (“Evaluation of antimicrobial activity of root extract of Asclepias curassavica”, Hemavani. C. and B. Thippeswamy in Recent Research in Science and Technology 2012, Vol. 4 (1): pp.40-43)
They are insecticidal too, and were used to clear buildings of insects, particularly fleas.
In the Ayurveda system of medicine in the Indian subcontinent the plant is used to promote sweating in fevers, to get rid of intestinal worms, as a purgative and emetic, (so the system is cleansed thoroughly by expelling excrement and vomiting) for stomach tumours, piles, and gonorrhoea. The milky latex is used to get rid of warts and corns. 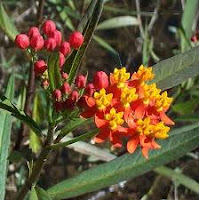 In traditional medicine in it is used for fever, to improve blood circulation and control both external and internal bleeding. The whole plant is dried and then made into a decoction as a cardiac tonic, for tonsillitis, bronchitis and pneumonia as well as for urethritis, and both internal and external bleeding. The latex from the plant is used to inhibit Candida growth.In some countries it is substituted for sarsaparilla in medicine.
The root has antioxidant properties and antibiotic ones according to the research evaluation mentioned above.
Calotropin has been isolated from the plant and this is a cytotoxic principle in vitro against cancer of the nasopharynx. “Calotropin, a Cytotoxic Principle Isolated from Asclepias curassavica L.”; S Morris Kupchan, John R Knox et al in Science : Vol. 146. no. 3652, pp. 1685 – 1686.

It has been used to staunch bleeding and has styptic properties and this has been borne out by the following research which concluded thus: “Cysteine proteases from Asclepias curassavica latex exhibited strong pro-coagulant action and were found to be specific in its action (Thrombin like). This could be the basis for the use of plant latex in pharmacological applications that justify their use as folk medicine.” (Journal of Ethnopharmacology. 2009 May 4; 123 (1):106-9. “Thrombin like activity of Asclepias curassavica L. latex: action of cysteine proteases” Shivaprasad H. V. et al.)

It has also shown to have some Chemopreventive properties as outlined in ”Chemopreventive potential of β-Sitosterol in experimental colon cancer model - an In vitro and In vivo study” by Albert A Baska, Savarimuthu Ignacimuthu, Gabriel M Paulraj and Khalid S Al Numair in BMC Complementary and Alternative Medicine 2010.
This plant clearly has some potential health benefits for us, as more research will doubtless show. It is not only here for the benefit of the Monarch butterfly.
Posted by abbas at July 02, 2012