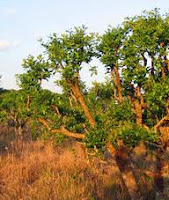 PARAGUAYAN HOLLY TREE, YERBA MATE ILEX PARAGUARIENSIS
Yerba maté is a popular drink all around the world these days, and it comes from an evergreen tree that is closely related to the British (or European) holly tree Ilex aquifolium. Like this holly the Paraguayan or South American one starts like as a shrub, but can grow up to 18metres tall. In the wild it grows with Araucaria species, which include the Monkey Puzzle tree. However it is classed as near threatened in the IUCN red list.

A Spanish explorer, Juan de Solis, who is famous for exploring the La Plata River, stated that the Guarani Indians made a drink which “produced exhilaration and relief from fatigue” in his expedition in the 16th century. Other Spaniards liked the drink too and the Jesuits started the first cultivation of wild plants of Ilex paraguariensis. By 1670 they had maté plantations. When the Jesuits were expelled from the Spanish lands in in 1767, Ilex paraguariensis stopped being extensively cultivated.

Today there are plantations but the years of harvesting the leaves from the trees and young shrubs had already taken its toll on the plants. The tea made from the leaves has been also called Jesuits’ tea and Paraguayan tea.
Other Ilex species leaves are sometimes added to yerba maté and this accounts for the different tastes and properties of the tea drunk. Although yerba maté is now believed to have many health benefits, it has been found that heavy drinkers of the beverage have an increased risk of developing upper aerodigestive cancers, particularly oropharyngeal cancer. Despite this people still drink it copiously. 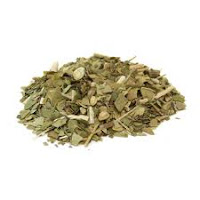 Traditionally the beverage was drunk from gourds, particularly those of Langenaria vulgaris which in Quechua are called mathi- which is how we get the name maté, with yerba meaning herb. The leaves and twigs are dried and heated, and packed into the gourd, and then boiling water is poured over the leaves and they are allowed to infuse. Today yerba maté is brewed in gourd-shaped bowls and drunk through a metal ‘straw' with holes in the bottom of it which act as a strainer so you don’t get the leaves in your mouth. There are yerba maté bars throughout , just as there are coffee bars in and .

Despite its popularity around the world, there is not as much research on yerba maté as there is on coffee and green tea. However it seems that it can help manage obesity and lowers LDL-cholesterol. It has mild laxative properties and is also a diaphoretic so promotes sweating just as tea does. It is also a diuretic, so can help people who need to get rid of excess water because of other ailments.
Yerba maté contains caffeine so it is a stimulant and the old Spaniards were right, it does dispel fatigue and stimulates the central nervous system. It is also a nutritious drink containing vitamins A, C, E and the B-complex vitamins B1 niacin, B2 riboflavin and B3 niacin as well as B5. As for minerals it contains aluminium, chromium, copper, iron, manganese, nickel, potassium and zinc along with 18 amino acids.

The drink is said to enhance the memory functions and delay the aging process. It also stimulates digestion, and provides mild pain relief. A poultice of the leaves is used for anthrax ulcers, and is probably effective due to the tannin content of the leaves and their astringent properties.
In yerba maté has been approved for relief of mental and physical fatigue, and in for weakness, or lack of energy. It is in the British Herbal Pharmacopoeia of 1996 for the relief of headaches, and fatigue as well as for weight loss. In one of the traditional systems of medicine of the Indian subcontinent, Ayurveda, yerba maté is prescribed for headaches, nervous depression, fatigue and the pains of rheumatism.
Research is still continuing on yerba maté to discover what health benefits it actually has.
Posted by abbas at July 02, 2012