ROYAL FERN, OSMUNDA REGALIS
The royal fern is the tallest native fern in the British Isles, and can grow to heights of ten feet in moist, shady places. It is also called the flowering fern, as it has showy seeds in June through to August. It is native to Europe, North Africa and Asia and a subspecies flourishes in North America. It is one of my favourite ferns, as it grew profusely in Wales and I could easily hide from my long-suffering grandfather in those tall ferns.

The name Osmunda probably comes from the Saxon os (meaning house) and mund, peace, so it was a symbol of domestic peace. Another etymological explanation is that is comes from the Latin with os meaning bone, and mundare meaning to cleanse. This would refer to its use for diseases of the bones caused primarily by malnutrition (e.g. rickets). Regalis means royal or regal in Latin. It is a member of the Osmundaceae family of plants.

Like bracken seeds which were supposed to make the holder of these invisible, there is also a legend regarding the sporangia (seeds or spores) of the Royal fern. It was supposed to have magical powers, and to uproot a fern, or at least to harvest its seeds, one had to draw a circle around oneself and the fern, and then withstand the onslaught of demons. However it was worth the fright, because a person who had the fern seeds could command demons and defeat them they also would have wishes granted and would also be able to understand the language of trees. Also secrets would be revealed to them. Clearly it was worth braving a few demons to obtain the fern, although this could only be done on the evening before Easter. The fronds are fertile in April so this makes some sense.
The fronds were once combined with wild ginger and given to children who suffered from convulsions caused by parasitical worms. 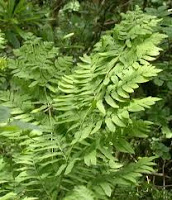 Hairs of the Royal fern were formerly  mixed with wool to make cloth, while the roots were the source of Osmunda fibre, which was very popular for potting orchids.
The root of the Royal fern is mucilaginous and soothes the mucous membranes, so was used in a decoction for jaundice, to remove stones from the internal organs, and a conserve made from the root was given in cases of rickets. It was also recommended for lumbago and the young fronds were made into an ointment which was used on bruises, dislocated bones and wounds. The fronds were used externally as a poultice for rheumatism.
John Gerard, writing in the 16th century had this to say about the royal fern:-
“The root and especially the heart or middle thereof, boiled or else stamped and taken with some kind of liquor, is thought to be good for those that are wounded, drybeaten and bruised, that have fallen from some high place.”
He is a little vague as his wisdom came from older more ancient herbalists. Nicholas Culpeper, writing his Herball in the 17th century had this to say about the medicinal properties of the Royal fern:-

“Government and virtues. Saturn owns the plant. This hath all the virtues mentioned in the former ferns, and is much more effectual than they, both for inward and outward griefs, and is accounted singular good in wounds, bruises, or the like. The decoction to be drank or boiled into an ointment of oil, as a balsam or balm, and so it is singular good against bruises, and bones broken, or out of joint, and giveth much ease to the cholic and splenetic diseases; as also for ruptures or burstings. The decoction of the root in white wine, provokes urine exceedingly, and cleanseth the bladder and passages of urine.”
Modern day science recognizes that the Royal fern has antispasmodic, antioxidant, antibacterial and astringent properties. In the International Journal of Pharmaceutical and Biological Archives, 2011, vol.2 (1) pp559-62, “Preliminary Antibacterial and Phytochemical Assessment of Osmunda regalis L.” Toji Thomas concludes:-
“Leaves can be recommended as a source for isolating and characterizing new antibacterial drugs for modern medicine.”
It seems that those ancient ferns will have a productive modern use.
Posted by abbas at July 02, 2012