MORMON TEA PLANT, JOINTFIR, EPHEDRA NEVADENSIS
The evergreen shrub known as Jointfir, or Mormon Tea plant is native to the south-western US. As the Mormons are not allowed to drink coffee because it is a stimulant (containing, as it does, caffeine) the twigs of this plant are used to make a tisane or tea, hence the name. The plant does not have leaves as such but has spiky green twigs, which resemble a fir tree’s needles (for example those of the European silver fir).

The flowers are reminiscent of those of the Greek mountain tea plant, and these bloom in April through to the end of June. The fruit is a smooth brown nutlet which can be cooked although it tastes bitter, and it may be roasted and ground to make flour for using in making bread.
This plant is in the Ephedraceae family, making it a close relative of the Sea grape, Ephedra distachya. Because it is in the Ephedra genus, it was supposed that it has the same properties as other plants in that genus; but it seems that this is not the case. This plant contains no, or very few, Ephedra alkaloids, according to the European Food Standards Agency’s (EFSA) report of 2009. That being the case, most of what has been written about the plants’ psychoactive properties online is probably not true. 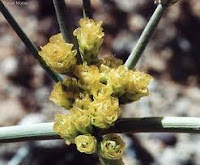 Mormon tea is made by taking the twigs of the plant and infusing them to make a tea or tisane. Both the fresh and dried twigs can be used, and for drying purposes the green twigs can be harvested at any time of the year.
Traditionally the tea was made by Native Americans who used it medicinally as a blood purifier, diuretic and to lower the temperature of the body during fevers. It was also used as a general tonic and for kidney, urinary-genital problems and STDs.
The plant does not contain ephedrine, or at least, not much, so all the literature regarding this compound does not apply to this particular member of the Ephedra genus.

The fruit from the plant can be eaten raw, although it is a little bland, but sweet, and the twigs can be chewed to treat the symptoms of asthma, but not the root cause. It makes respiratory problems easier, but does not cure them.
There are rarely any side effects if you drink Mormon tea in moderation, although you may experience some if it is drunk to excess.
The plant does contain the compounds, kynusenates, which have antimicrobial properties, and it is a very effective diuretic and because of this property, it can contribute to weight loss.
Posted by abbas at July 02, 2012