HYACINTH BEAN, LABLAB PURPUREA
The hyacinth, or lablab bean has many other names, including the Egyptian kidney bean, Australian pea, Tonga bean, Kikuyu bean, Indian bean and the Field bean to name but a few. It originated either in or , or perhaps both locations, as the wild variety which grows in is a transition species, one which bridges the gap between the truly wild and ancient plant and the cultivated varieties. There are no truly wild species now.
The hyacinth bean is a member of the bean or pea family, Leguminoseae or Fabaceae; which makes it a relative of the butterfly pea, borlotti beans, chickpeas, carob, broom, milk vetch, laburnum and Indian laburnum, lupins, indigo, the pongam tree, soya beans and many other plants. The former botanical name for the plant was Dolichos lablab.

It is an ancient crop and has been cultivated at least since 3,500 BC in the Indian subcontinent according to archaeological evidence. It can grow alone or mixed with other crops such as millet, sorghum, castor bean plants, corn or peanuts, and these are the companion crops most used in and .
In southern Indian states and , the hyacinth, or lablab bean, is one of the most important staple protein crops. In it is cultivated mainly as a feed crop for animals. In the it is mainly grown as an ornamental plant, for its, dark green, purple-veined leaves and pea-like flowers which range in colour from white to violet and purple.

The young immature pods with their seeds, or beans, are cooked and eaten like green beans, while the older pods need to be de-stringed in the same way as French beans do. The young leaves may be eaten raw in salads, or cooked like spinach. The flowers are edible too and can be eaten raw, added to soups, or steamed. The tuberous root is starchy and can be baked like a potato or yam, or boiled. The seeds, or beans can be boiled and eaten like broad beans or other beans, but the dried seeds need to be boiled in two changes of water so that all toxins are removed. These toxins are cyanogenic glycosides, and can cause mild symptoms of poisoning. 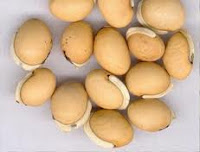 In some parts of the beans are left to ferment and are used like soya beans to make tempeh or tofu. They can also be sprouted and the sprouts can be used in salads, sandwiches and so on.  The plants are grown for their seeds or beans as other Fabaceae or Leguminoseae plants are grown.
The pods may be white, yellow, brown, purple or black, and as well as being a source of protein also contain the minerals calcium, iron and phosphorous, while the young, tender seed pods are rich in thiamin (vitamin B1) and are a source of vitamin C. 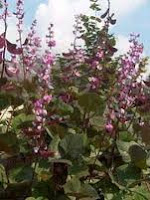 Apart from their nutritional value the plant is also used in traditional systems of medicine. In the boiled ripe seeds are thought to be a tonic, and good to get rid of flatulence. The beans are also used as an aphrodisiac, for fevers, stomach problems, and as an antispasmodic. When the beans are used regularly in a diet, they prevent a build-up of cholesterol. “Hypocholesterolemic effect of diet supplemented with Indian bean (Dolichos lablab L. var lignosus) seeds”: Vadde Ramakrishna et al. Journal: Nutrition & Food Science, 2007 Vol. 37 (6) Page: 452 – 456.

One study also found that they were appetite suppressants. “Peptides derived from dolicholin, a phaseolin-like protein in country beans (Dolichos lablab), potently stimulate cholecystokinin secretion from enteroendocrine STC-1 cells” Journal of Agricultural and Food Chemistry 2007-Oct; Vol. 55 (22): pp 8980-6. Other studies are needed before this can be proved and be helpful in the treatment of obesity, however.
Yet another study found that extracts of the hyacinth bean have antimicrobial and antifungal properties
“Antimicrobial Investigation of Different Extracts of Dolichos lablab beans” Akash P Dahake et al. Research Journal of Pharmacognosy and Phytochemistry,  Vol. 1 (2), Sept-Oct, 2009. 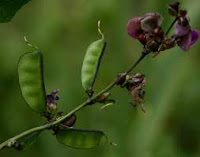 An infusion (or tisane) of the leaves is considered a treatment for gonorrhoea, colic, abnormal menses and vaginal discharge, while in the Philippines, where the Hyacinth bean is cultivated (and called bataw), the juice from the leaves mixed with lime juice is used on abscesses and tumours.  The juice with salt is used for sore throats and ear inflammation.
A poultice of the leaves is mixed with rice flowers and turmeric in and applied to troublesome eczema.
This plant which is little used in the West clearly has health benefits, although these need to be further explored, especially as parts of the plant contain toxins.