CREOSOTE BUSH IS NOT RECOMMENDED FOR INTERNAL USE AS MEDICINE: HISTORY AND POSSIBLE FUTURE HEALTH BENEFITS OF CREOSOTE BUSH

CREOSOTE BUSH OR CHAPARRAL, LARREA TRIDENTATA
The creosote bush is so named because after a rainfall it smells like a wooden telegraph pole that has been treated with pitch. However commercial creosote does not come from this plant. It is native to the arid areas of the and and has its homes in deserts and canyons. It is a member of the Zygophyllaceae family, so is a relative of Guaiacum officinale from which we get lignum vitae, puncture vine (Tribulus terrestris) and Syrian rue, among other plants. 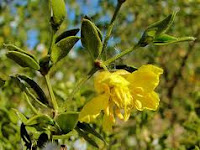 Like the Jurupa oak it can boast of being one of the oldest living organisms on the planet as one clone range of plants in the , has been dated to around 11,700 tears old. The plant splits its crown when it is between thirty and ninety years old and produces clones of itself, and all the plants have come from just one seed.
It was much used by Native Americans as a medicinal plant, but it also useful as it can absorb chromium from the soil it grows in. However nothing can grow near it as it is very competitive in terms of the water it needs. Plants growing under it can only survive for a limited time due to the highly toxic substances it produces at root level.

The plant can cause contact dermatitis and is thought to be toxic to the liver, and for this reason its internal use has been banned by the US Food and Drug Administration. However it contains Norhydroguaiacetic larreic acid (NDGA) which, before synthetic antioxidative materials were produced, was added to processed meats to prolong their shelf-life.
NDGA is currently being researched to discover its potential in treating HIV/AIDS and cancers, among other diseases. It is a powerful antioxidant, anti-inflammatory agent, anti-tumour and anti-microbial. 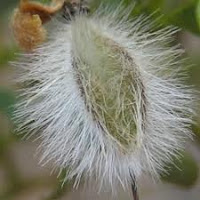 The plant possesses antiviral properties and is successful in treating herpes, and is anti-inflammatory, helping with rheumatism and arthritis and other inflammations.
The Native Americans used it for a number of diseases, including colds, as an expectorant in chest complaints, for cancer, toothache (they dripped the hot resin from the young twigs onto the tooth or place where the tooth ached) and a paste made from the leaves was used to heal wounds, lesions and bruises.
A decoction of the leaves was given for diarrhoea and stomach problems. To allay thirst, the twigs may be chewed, if you are in the heat of the desert. The resin from the leaves and twigs is helpful in that it can prevent other fats or oils from turning rancid, or it can at least delay that process. It can also be used as a massage oil (if you like the smell), and can also provide some protection from the sun’s harmful rays.

The flower buds can be pickled in vinegar and used as a substitute for capers. The plant can also be used for animal fodder, and is used to make roofing material for adobe dwellings. The twigs and leaves were washed and sun-dried to make a tisane, but the internal use of the plant is not to be recommended.
Posted by abbas at July 02, 2012