ROUND-LEAVED WINTERGREEN, PYROLA ROTUNDIFOLIA
This wintergreen is native to , including , North and and north-eastern . In it was known as False or British wintergreen, as opposed to Gaultheria procumbens, the North American wintergreen. They were both at one time in the Ericaceae family of plants although both have now been moved to their own respective families, with the round-leaved wintergreen being in the Pyrolaceae family. Formerly both plants were thought to be closely related to cranberries, blueberries, bilberries, the strawberry tree and the Greek strawberry tree. 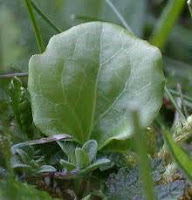 The botanical name for the plant means little pear, Pyrola and rotundifolia, round leaves. It was believed that the plant has leaves resembling those of the pear tree. Synonyms for the botanical name of this plant include Pyrola Sweet, Pyrola obovata and Pyrola rotundifolia L. var. americana (Sweet) Fernald.
This plant likes to grow in wet places and will thrive in beech forests, and bogs, as well as other moist woodlands. It grows to heights of about a foot with a similar spread. It flowers between June and September, depending on the climate of the country in which it grows, and the leaves first appear in mid-January. They are harvested in mid-summer as they are the parts used medicinally. They can be dried and stored for later use or used fresh.

The leaves have astringent, antiseptic, anti-rheumatic, anti-spasmodic, cardiotonic, diuretic, sedative, contraceptive and tonic properties. Native Americans used a whole plant decoction for an eyewash and to staunch external bleeding, for skin problems and sores. An infusion of the leaves was used as a gargle for sore throats and oral problems. An infusion, or tisane, from the root was used for back problems, muscle pains and rheumatism. The tisane was also drunk before hunting as it was thought to bring good luck.
Internally the decoction of the leaves was used to treat epilepsy and nervous disorders and the astringent qualities of the leaves made it good for treating diarrhoea; and infusion of 5 grams of the leaves was made with a cup of boiling water for this purpose, which could be drunk 5 times a day to cure the problem. 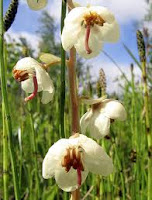 The plant contains arbutin which has diuretic and antibacterial actions, so scientific fact supports some of the traditional uses of the plant. In one study on animals a combination of milk vetch (Astragalus membranaceae) and the round-leaves wintergreen prevented damage to the kidneys and “the cochlear nerves and hair cells of the inner ear caused by the antibiotic gentamicin, commonly prescribed for pneumonia and sepsis” (from the Scholars Research Library, Archives of Applied Science Research, 2009, Vol. 1 (2) “Herbal drug toxicity and safety evaluation of traditional medicines” by Debjit Bhowmik et al.) Other research done on this plant has been reported in Mandarin.
Nicholas Culpeper, the English herbalsit, writing in the 17th century had this to say about the medicinal properties of this wintergreen: -

“Government and virtues. Winter-green is under the dominion of Saturn, and is a singularly good wound herb, and an especial remedy for healing green wounds speedily, the green leaves being bruised and applied, or the juice of them. A salve made of the green herb stamped, or the juice boiled with hog's lard, or with salad oil and wax, and some turpentine added to it, is a sovereign salve, and highly extolled by the Germans, who use it to heal all manner of wounds and sores. The herb boiled in wine and water, and given to drink to them that have any inward ulcers in their kidneys, or neck of the bladder, doth wonderfully help them. It stays all fluxes, as the lask, bloody fluxes, women's courses, and bleeding of wounds, and takes away any inflammations rising upon pains of the heart; it is no less helpful for foul ulcers hard to be cured; as also for cankers or fistulas. The distilled water of the herb effectually performs the same things.”
Perhaps there is more research needed so that we can have a better understanding of how it might benefit us in the future.
Posted by abbas at July 02, 2012