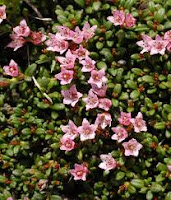 TRAILING OR MOUNTAIN AZALEA, KALMIA PROCUMBENS
This alpine plant grows in the and in in the . It can be found growing with Iceland moss, Mountain club moss and wild strawberries. It was formerly called Loiseleuria procumbens, but has recently been moved to the Kalmia genus. This means that it is now in the same genus as Kalmia latifolia, Mountain laurel which is indigenous to . Interestingly trailing azaleas are the only Kalmia genus not native to .
As a member of the Ericaceae or heather (ling) family, it is related to the Greek strawberry tree, the strawberry tree, yellow bird’s nest, wintergreen (Gaultheria procumbens), round-leaved wintergreen, bilberries, blueberries and cranberries. However the wintergreens have now been moved into their own separate families.
The rootstock of this plant is wide, with the majority of the plant being under the ground. The plants can live for between fifty and sixty years.

Nicholas Culpeper describes the flowers as red, and there are some, but these are rarer than the plants with pink flowers. In Culpeper’s day I suppose they grew in parts of Britian other than . He was the great English herbalist who wrote his Herball in the 17th century. This is what he said about the medicinal properties of the trailing azalea.
“Government and virtues. It is a plant of Mercury, and has a pleasing aromatic smell, resembling that of lemons; and is cordial and strengthening. It comforts the head and stomach, removes palpitations of the heart, helps the vertigo, or giddiness and swimmings in the head, and is greatly extolled by many, as a specific in nervous and hypochondrical disorders.”

Today it is not used in medicine it would appear from my research.
The Kalmia genus has an interesting history. It was named by Karl Linnaeus, often referred to as the Father of Botany, for his student, Pehr Kalm (1715-1779), who was from but studied under Linnaeus in . The of Sciences, on the recommendation of Linnaeus, sent Kalm to to find plants that could be grown in .
Kalm was accompanied in by the Canadian Gaultherias, and it was Kalm who named wintergreen (Gaultheria procumbens) after his Canadian companion.
Linnaeus named one of the North American shrubs that Kalm took back to , Mountain laurel Kalmia latifolia, after him, and so a genus was born to honour Pehr Kalm.
Posted by abbas at July 02, 2012

Email ThisBlogThis!Share to TwitterShare to FacebookShare to Pinterest
Labels: TRAILING OR MOUNTAIN AZALEAS