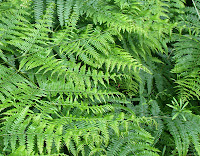 BRACKEN (FERN) PTERIS AQUILINA (LINN)
Bracken is probably the most common fern in Britain and ranges through most of the world, although it is not found in countries around either Pole. It was named by Carl Linnaeus, who believed that the markings when the base of the stem is cut obliquely resembled an eagle, so it was called aquilina whereas pteris comes from pteron or feather in Greek a clear reference to the feathery leaves of the fronds. Bracken must be a prehistoric fern, and although it normally grows to a height of around three feet, it can grow up to 10 feet tall. As a child I would hide from my grandfather when playing hide and seek in the bracken on the mountain, Twm Barlym.

In Scotland it is known as devil’s foot and witches were reputed to loathe this fern as when cut it has the shape of the Greek letter X (chi) in it which is the initial of Christ or Christos in Greek. In Ireland it was known as the fern of God. In the 17th century it was believed that burning bracken would help bring rain.
The spores of this fern are invisible to the naked eye, so people wondered how it propagated. It was believed that the seeds of the bracken were visible on St. John’s Eve at the precise moment of his birth only. Shakespeare makes reference to this phenomenon in Henry IV part I , Act II scene 1:
Gadshill…”We have the receipt of fern seed-we walk invisible.”
Here “receipt” means recipe.
Ben Jonson writing later in his play “The New Inn” or “The Light Heart” has this to say:-
“I had no medicine, Sir, to walk invisible,
No fern seed in my pocket.”
Clearly it was a common belief that if you had a fern seed upon your person, you would be invisible in the Renaissance and Jacobean England. Perhaps for this reason it was also thought to convey eternal youth.
Ancient people made diet drinks from the ferns and stems and used it as a remedy for numerous disorders, but as bracken when eaten raw by animals produces cancerous tumours, it is best avoided unless you know exactly what to do with it. It can, if eaten raw also deprive the body of thiamin one of the important B-complex vitamins.

Culpeper writes that the roots bruised and boiled in mead and honey water could get rid of intestinal worms and stop swellings of the spleen. Of the leaves he writes that they can “purge the belly and expel choleric and waterish humours that trouble the stomach.” He also mentioned that the bruised roots could be boiled in oil or “hog’s grease” and made into an ointment for wounds while the powdered roots were “used in foul ulcers” to bring about their rapid healing.  He also believed that when bracken was burned it could get rid of “noisome creatures” such as gnats and snakes.
Gerard writing earlier in the 16th century said that the root of bracken “cast into a hogshead of wine keepeth it from souring.”

The root or rhizome of bracken contains starch and can therefore be used as food in times of desperation, and it produces a lather when in water so can be used as a soap substitute. Young fronds have been used as a green vegetable and were once sold in bundles as asparagus is now. If you are desperate enough to want to eat young bracken shoots, you should wash them carefully in cold water and then par boil them for a few minutes, and then steep them in cold water for a few hours. You can then cook them like spinach and serve with melted butter or a butter-based sauce.
If you burn bracken the resulting potash is rich in the mineral potassium, and can be used as fertilizer. Dried bracken was once used as thatch and dye can be obtained from it-either green or brown.

In traditional medicine around the world, the young shoots of bracken are used as a diuretic, to cool the body and to expel worms. Native Americans used to lay babies and the frail on bracken leaves to strengthen their backs. They used the rhizomes for food, and either boiled or roasted them. The fronds were also used to make baskets and to clean salmon and eels before cooking them.
A tisane can be made from the roots to relieve stomach cramps, chest pains, internal bleeding, for colds, to get rid of intestinal worms and to stop diarrhoea. Poultices of the root have been used for mastitis, burns and sores. A tincture of the root in wine was used for rheumatism, while glue can also be made from the roots. Some people rub the powdered roots into their scalps to promote hair growth.
However modern medical research does not support these folk ‘remedies’ so bracken is best used as a fertilizer.
Posted by abbas at June 21, 2011