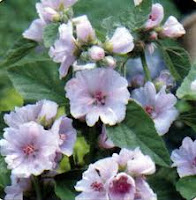 MARSH MALLOW, KHATMI IN URDU, ALTHAEA OFFICINALIS
The marsh mallow is native to Europe but was probably introduced to Britain by the Romans. It is related to the truly native common mallow and has much the same properties. Althaea comes from the Greek meaning “to heal” and of course, officinalis means official so this plant is an “official healer.” Its relatives also include the musk mallow, Malva meschata, hibiscus, hollyhocks, okra and cotton. There are around 1,000 mallow species and they all contain a gummy, substance called mucilage (think of okra).

The root of the Marsh Mallow used to be used to produce the confectionary of the same name, but now it doesn’t have a trace of marsh mallow in it. This sweet was first made by the Egyptians who boiled the root of the marsh mallow with honey, using it as a medicine for respiratory problems. The remedy was refined by a French pharmacist who added beaten egg whites to the powdered root and sugar. He called his concoction Pâté de Guimauve (which is the French for marsh mallow). 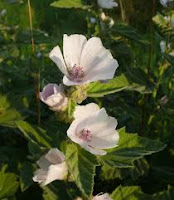 The root, flowers and leaves can all be used in medicine, all having different substances in them. The leaves contain the bioflavonoids, kaempferol and quercetin, coumarins and phenolic acids including caffeic and vanillic acid. The roots contain polysaccharides, pectins tannin and asparagines.
Commercial preparations of marsh mallow typically include other ingredients, one famous remedy for drawing splinters out of the skin is a paste made from slippery elm and marsh mallows, which can even as if by magic draw out bee stings. Pliny knew about this and only used the juice of the marsh mallow to do this. In fact Pliny regarded the marsh mallow highly as he said of it “Whosoever shall take a spoonful of the Mallows shall that day be free from all diseases that may come to him.”
The Roman writers Horace and Martial regarded it as a good laxative (not as strong as senna or jamalgota however) and Dioscorides mentions that it was placed on graves with the musk mallow. It is actually difficult to tell which mallow the ancient writers described as the one Dioscorides used was rose-red, while Theophrastus describes one with yellow flowers. Hippocrates, the Father of Medicine used mallow to clean and heal wounds, but Dioscorides used it for diarrhoea, internal injuries, nerve pain, bee stings and toothache among other things.
In the Middle Ages Paracelsus used it for wounds to clean and heal them, while Lonericus and Matthiolas used it as an expectorant and diuretic as well as for internal injuries (following Dioscorides), ulcers and burns etc.
You can make an infusion or decoction of the peeled root for skin problems (apply it to the affected areas) and take it orally as a gargle for mouth ulcers and a sore throat.

If you take all the above ground parts of the marsh mallow, and pour boiling water over it, leave this to steep for 3 hours and drink ½ a pint a day for gravel and kidney stones. However this should be discontinued after 3 or 4 days and you can start again after this period. An old Victorian remedy suggests that you can put a teaspoonful of gin into this drink if there is no inflammation! (Those prudish Victorians were very fond of gin.)
A remedy for diarrhoea was to boil the powdered root in milk, and in wine for respiratory problems to relieve coughs, bronchitis etc.
For a tisane of the flowers you should pick them as they are about to bloom and take a handful to a pint of boiling water and leave them to steep in it for 15 minutes.
The Romans considered the flowers a delicacy, and in former times the tender young tops and leaves were eaten in salads, although if you eat them you may want to steam them first as tastes have changed. They are good for the kidneys apparently.

If you peel the root and pour boiling water over it, you can use the water for coughs internally and externally it can relieve sunburn. You can make a gel for dry hands by boiling peeled marsh mallow roots until you get a gel although if you stop the process before the gel forms, you can use it as a hair rinse on dry hair.
In Europe marsh mallows are found along with other ingredients in many ointments and syrups and used to clean wounds, heal ulcers, and generally in products which are for the treatments the traditional healers used to employ marsh mallows for.
The marsh mallow is a very versatile herb that has been used throughout the ages for a variety of ills.
Posted by abbas at June 29, 2011