COFFEE ( COFFEA ARABICA) - HISTORY AND MEDICIAL RESEARCH: COFFEE IS GOOD FOR YOU: HOW TO MAKE GREEK OR TURKISH COFFEE

COFFEE, COFFEA ARABICA
Coffee grows on bushes or small trees, and the beans ripen in pods called cherries. You probably know the story of how an Ethiopian goat herder noticed his goats were friskier than usual after eating the red berries on a bush. He ate some too and realized the stimulant qualities of what we now call coffee. This is a similar tale to the way Cordyceps sinensis otherwise known as the caterpillar fungus, was found by yak herders in Tibet.

By AD 1000 coffee had found its way into the Arabian Peninsula and was a well-kept secret among Muslims, who at first used it for its stimulating qualities, allowing them to stay awake all night during special prayer times. Later coffee shops opened and it was drunk for pleasure as it is now.
No fertile bean grew outside of the Muslim world, and it took Baba Budan to smuggle some out of Mecca, or so the story goes. The Turks had coffee and this was introduced to Europe in 1615. The Europeans adored it and the race was on to establish a coffee trade. The Dutch were the first to have a plantation owned by Europeans, on Java, Indonesia. The beans were given away by the Dutch to European royalty and from the plant given to Louis XIV around 1714, other plantations sprung up, notably in the West Indies. Arguably one of the best (and most expensive) coffees in the world is Jamaican Blue Mountain coffee.

A Brazilian Colonel was sent to French Guiana ostensibly to settle a dispute, but in fact to steal fertile coffee beans which he did, although he didn’t exactly steal them, they were a gift for his ‘services’ from the governor’s wife, hidden in a bouquet when he left and so his mission was successful, as Brazil is now one of the biggest coffee exporters in the world.
The coffee bean has a rather lurid history to be sure, and has been reviled because it was once said by scientists to be cancer forming. This was actually retracted by the researchers a day after publication in the world’s press, but the general public only remember the ‘fact’ that coffee caused cancer and not the retraction.

One coffee plant can produce one pound of coffee beans, and unfortunately the plant is subject to blight which can decimate crops and cause prices to rocket. Banking on coffee futures is often not a good investment. The coffee plant is a member of the Rubiaceae family along with Kadamb.
2011 was a good year for coffee, as researchers at the University of Bristol, UK conducted a study which showed that women performed memory tests better after drinking coffee, and reacted more quickly than usual to stressful situations. On the other hand men were slower and not as responsive as the women in the study.

Harvard research later in the same year found that if a man drank coffee (more than 6 cups a day was optimal) then they lowered the risk of getting prostate cancer, and if they contracted it, it was less likely to be terminal.
Yet another Harvard study showed that coffee drinking did not increase the risk of having a second stroke nor did it adversely affect people with cardio-vascular problems. If you have a heart problem the researchers say, you don’t have to give up drinking coffee.

If you start drinking coffee at thirty then you will have health benefits, such as staving off Alzheimer’s disease and Parkinson’s disease. These were the results of two separate studies. Four to five cups a day are deemed to be moderate. The coffee should be caffeinated but decaff will do scientists think.
As yet they have not identified the substance or compound in coffee that has such beneficial effects on our health, so studies into coffee are ongoing.

In Italy and Greece people don’t just eat lots of tomatoes, with olive oil, but they also consume a lot of coffee. It has potent antioxidant properties along with chocolate, red wine and green tea. Greeks will take hours over a small cup of coffee and a glass of water in their cafeneions (traditional coffee houses). In both Greece and Turkey fortunes are told by reading the coffee grounds; you upturn the cup when you have finished and the sludgy coffee will plop onto the saucer, after a few minutes. The cup is then turned up the right way and the outlines on the sides of the cup are interpreted for you, in much the same way as people read tea leaves in Britain. In Greece frappé coffee is the norm in summer made form instant coffee. You take a spoonful of it and mix with sugar and a tiny amount of water. Whisk this to a froth then add water and ice and milk if you like.

Below is the recipe for Greek or Turkish coffee, traditionally made in a briki or long-handled pot. You can use a small saucepan if you don’t have one. Crushed green cardamom seeds may be added to the coffee if you wish or a whole pod for several cups of coffee. You can also add a small piece of cinnamon or cassia to the pot and boil it with the coffee. For a chocolate and coffee mousse see our chocolate post. 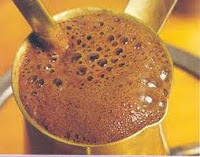 GREEK OR TURKISH COFFEE
Ingredients
1½ -2 tsps ground Arabica beans
1½-2 small coffee cups water
sugar to taste
Method
Put all the above ingredients into the briki and stir well then slowly bring to the boil. 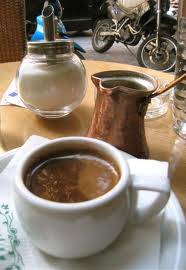 Quickly remove it from the heat and turn the heat down to low. Allow the coffee to boil again, it will be very frothy.
Pour into the cup and drink.
Makes 1 cup
This has Taste and is a Treat.
Posted by abbas at June 26, 2011