DRUMSTICK TREE, HORSERADISH TREE, BEN OIL TREE, MORINGA OLEIFERA
The Drumstick tree has some truly amazing properties, both medicinally speaking and ones that help people in their everyday lives in hot countries. It is not to be confused with the Monkey pod tree, which has similar pods also called drumsticks. It is native to India, Pakistan, Bangladesh and Afghanistan, although it now grows in tropical areas in Africa and South America.

It is one of Nature’s marvellous medicine trees with every part good for something. The leaves are amazingly nutritious and it is hoped that they could be the answer to malnutrition, as they possess, gram for gram, three times as much potassium as bananas, seven times the vitamin C content of oranges, 4 times the amount of calcium in milk and twice the amount of protein in milk and eggs, and four times the amount of vitamin A found in carrots. The leaf powder which is given to children suffering from malnutrition and breast-feeding mothers to promote lactation contains all 8 essential amino acids. The fruit contains the minerals magnesium, calcium, iron, vitamins A and C as well as some B-complex ones. The bioflavonoids found in parts of the tree include kaempferol and quercetin. 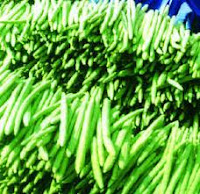 Apparently it was known and used by peoples of the ancient world, including the Romans, Greeks and Egyptians. The seeds are brown and triangular in shape, and are used to purify water in Sudan and Malawi, and their oil is also used in perfumes and hair care products. The oil can also be used as a salad dressing, or as lubricating oil. They may be eaten raw, and are said to taste like peanuts, or roasted or powdered and made into a tisane. They are also used in curry dishes.
The trees can be used to make living fences, and the crushed leaves are used in households for cleaning purposes. The wood produces a blue dye; while the gum that exudes from the trunk when it is cut is has the same uses as tragacanth (gond katira) and the powdered seeds are used to clarify honey and sugar cane juice. The leaves are a good source of biofuel, and the flowers can be made into a tisane or eaten as a vegetable and added to sauces (in the same way as kachnar buds). They are also processed and made into effective pesticides. The young fruit are used as green vegetables and can be pickled while the older fruit are used in sauces. Paper can be produced from the wood pulp of the tree and the tree is also used for fuel, making good charcoal.

Apart from having highly nutritious leaves, the fruit is also a healthy nutritious addition to a dish, but it also has some remarkable medicinal uses, some of which have been supported by medical research. For example the fruit has a hypolipidemic affect on the fats in the organs which are excreted. The tree has potent antioxidant qualities and seems to have anti-cancer potential, as well as being able to detoxify the body. It has antibiotic qualities as well as pain killing ones, can lower high blood pressure and has antibacterial properties.
In the Ayurvedic system of medicine it is said to cure or prevent around 300 diseases and in India the seeds are used to cure impotency and erectile dysfunctions, and to prolong a woman’s sexual activity. Parts of the tree are used to maintain regular menstruation and it is thought of as a “Mother’s herb”. It is used to reduce inflammation caused by rheumatism and arthritis, and a paste is applied to the forehead to stop headaches and joint pains.

It is used to cure obesity, for all types of skin problems, diabetes, fever, eye problems, digestive disorders, respiratory tract problems, including to clear mucus and to stop coughs. It is said to stimulate the blood circulation and the nervous system, and to prevent infections of various sorts.
Medical research is still being done on this tree and all its parts, but given that the leaves are so nutritious, it seems clear that they should be used in powder form for those in developing countries suffering from malnutrition. 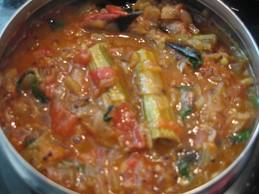 DRUMSTICK CURRY
Ingredients
12 drumsticks, peeled and cut into 5 cm pieces
4 onions, thinly sliced
6 green chillies, slit lengthways
4 cloves garlic, finely chopped
oil or ghee for frying
tamarind (imli) pulp for 4-5 seeds
1 tbsp dry fried and ground cumin seeds
2 green cardamom pods, seeds removed and crushed
1 tbsp coriander seeds, dry-fried and ground
1 stick cinnamon or pieces of cassia bark
1 tbsp turmeric (haldi), powdered
1½ inch piece of ginger root, peeled and finely chopped
a few curry leaves
1 tbsp lemon juice
½ pint coconut milk
Method
Heat the oil in a pan and add the onions, garlic, ginger and chillies and fry for 5 mins.
Add the spices and cook for a further 3 mins.
Now add all the other ingredients apart from the imli pulp and half the coconut milk.
Cook over a low heat until the drumsticks are tender.
Add the tamarind pulp and simmer for a further 5 mins.
Add the rest of the coconut milk, bring to the boil and then remove from the heat and serve with roti, naan or plain boiled rice.
This has Taste and is a Treat.
Posted by abbas at June 13, 2011