HART”S TONGUE FERN, SCOLOPENDRIUM VULGARIS, OR ASPLENIUM SCOLOPENDRIUM (LINN) OR PHYLLITIS SCOLOPENDRIUM
The Hart’s Tongue Fern is native to Europe and there is a variety of it in North America, Phyllitis scolopendrium var.americana which is smaller than the European variety. It’s a member of the spleenwort family, Aspleniaceae and grows in Asia too and parts of North Africa, and prefers moist, shady places. It can grow in woods and along river banks, as well as in walls. I have a vague memory of the leaves not having a pleasant smell when bruised, and I avoided the fern as a child because I didn’t like the waxy feel of its leaves which are shaped like the tongue of the red deer, or so it was thought, hence its name. Perhaps I didn’t appreciate it because it grew on damp walls on buildings I didn’t particularly like, such as public toilets.

It was known to the ancient Greek physician Galen (c 130-210 AD) who is deemed to be second only of the ancient Greek physicians to Hippocrates, the Father of Medicine. He used it in remedies for dysentery and diarrhoea because of its astringent qualities, in an infusion, made from 2 ounces of the leaves to 1 pint of water. This was later used by medieval physicians to remove obstructions of the spleen and liver.
Dioscorides, writing his Materia Medica in 1 AD remarked that the leaves tasted bitter, and recommended it being drunk with wine as an antidote to snake bites and for diarrhoea and dysentery. 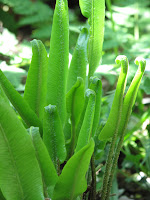 The fronds can be harvested in summer and dried for later use. If dried, it can be made into an ointment for scalds, burns and piles. It was one of the five great capillary herbs along with the maidenhair fern which is a common house plant in often growing in pots in British bathrooms.
The mediaeval herbalists called it lingua cervina or deer’s tongue in their old herbals. Culpeper writing later, in the 17th century says “It is a good remedy for the liver” and goes on to include its benefits to the spleen and “the heat of the stomach.” He continues: -
“The distilled water is very good against the passion of the heart, to stay hiccough, to help the falling of the palate and to stay bleeding of the gums by gargling with it.”

It has been used to ease gout, clear the eyes, heal fresh wounds (juice from the leaves) reduce fevers and to get rid of warts and pistules in early European traditional medicinal systems. It is mentioned in Michael Drayton’s (1563-1631) poem, Poly-Olbion, Song XIII, referring to its use for removing stones and gravel from internal organs, “hart’s tongue for the stone.”
It has been the subject of some clinical trials which suggest that it may be effective for digestive disorders as Culpeper thought, and that it may increase production of urine as well as soften stools (as senna does) and it may stimulate the bowel to contract and empty (in which case it would be good for constipation and piles perhaps).
The physicians of Myddfai had this recipe for remaining chaste, (not involving the chaste berry), presumably for a woman rather than a man.
“If you would always be chaste, eat daily some of the herb called hart's tongue, and you will never assent to the suggestions of impurity.”

Apart from having remedies for ailments, these old physicians also gave dietary advice and here is what they had to say for the
“Month of May. Do not eat sheep's head or trotters, use warm drink. Eat twice daily of hart's tongue, fasting. Take a gentle emetic. Use cold whey. Drink of the juice of fennel and wormwood.” It isn’t clear whether this refers to the herb or the deer’s tongue, but whichever, it wouldn’t have made much of a meal; an austere diet, to be sure, but one that was perhaps followed by the adherents of the physicians of Myddfai in Wales.
Posted by abbas at June 10, 2011