CHINESE LANTERN PLANT, PHYSALIS ALKEKENGI
This plant is aptly named as the calyx which surrounds the small cherry-like fruit looks like a decorative Chinese lantern. It is closely related to the Cape gooseberry and Tomatillo and in the same Solanaceae (nightshade) family as the potato, aubergine, and the Nipple fruit. You usually see it in November as it makes its presence felt in early November, and is used in floral decorations. Most people think that this is all it is useful for, but of course they are wrong. It is also called the winter cherry, but should not be confused with Ashwagandha, and the bladder cherry.

The plant was first found in Japan, and was adopted into the Chinese medicine system as it has some amazing medical properties. If you want to grow one, it seems that they are relatively easy to grow and prefer to have lily-of-the-valley as companions. Historically they have been used to reduce fevers, help stop coughs, as an expectorant, as a diuretic for gout sufferers and to disperse stones and gravel in the kidneys. They also have anti-inflammatory properties and in Iran they were used to induce labour. The juice from the berries or fruit has diuretic properties, but the whole plant above ground can be used. In traditional medicine in Iran they have been used for centuries to stop constipation, to ease the pain of arthritis and rheumatism, and to inhibit female fertility. 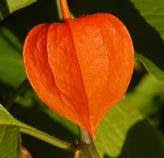 Modern research has shown that extracts from the plant have antioxidant activities as well as anti-microbial and antifungal ones. In rats they proved to have anti-fertility effects probably because they inhibit the egg from attaching itself to the womb, although this is not conclusive. The husks are a source of zeoxanthin (sadly lacking in Western diets generally) as does cayenne pepper, sea buckthorn (Hippophae rhamnoides) paprika and dried wolfberries. This helps to prevent the onset of age-related loss of vision, as does lutein. The fruit contains twice as much vitamin C as lemons do.
So next time you see one of these decorative plants, you will be aware of the medicinal value they have – they are not just easy on the eye.
Posted by abbas at June 04, 2011