JUPITER’S SAGE, SALVIA GLUTINOSA
Jupiter’s Sage, or Jupiter’s Distaff or Staff is a member of the sage family and is a Lamiaceae or Labiatae. It has both culinary and medicinal uses, although these are not well documented. It is native to Central and Eastern Europe and West Asia, growing in damp places and in deciduous forests. It has aromatic leaves which are or were, at least used in country wines. It produces a sticky, edible gum and this gives rise to other names for the plant which include Sticky Sage and Glutinous Sage.
It has heart-shaped green leaves and yellow flowers which are dotted with maroon or red-brown marks. Not much research has been done on this plant although what has been done suggests that it could be useful medicinally. 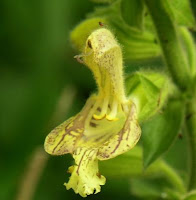 The gum contains triterpenes, which include friedelin, β-amyrin, 11a-hydroxy- β-amyrin and epialauserol; 15 diterpenoids have been isolated from the dried roots of this plant, among them isotanshinone which is a new natural product. Eleven new compounds were also found.
The plant also contains linalool which is used in perfumery, is a natural insecticide and comes form various plants including lemons and bergamot; also nonanal and β-Ocimene. The essential oil proved in lab tests to be effective against E.coli and Staphylococcus aureus so it has antibacterial properties. This leads one to believe that it is useful against some gastro-intestinal problems, so perhaps this is how it is used in folk medicine in places where it is indigenous. However this is purely speculation. 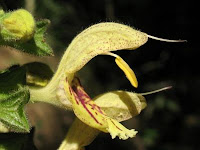 Researchers think that it might be useful in preparations with antiepileptic, antiarhythmic, analgesic and spasmolytic effects.
It also contains the bioflavonoids which are actually flavones, apeginin and luteolin. The latter has antioxidant properties as well as anti-inflammatory ones and is believed to be an immune system modulator. Scientists also believe that it has cancer preventing properties.

Although some research has been done on Jupiter’s Sage, more needs to be done so that scientists can discover what the new substances they have found in this plant can do to keep us healthy.
The pictures are from Luirig altervista.com which has some wonderful plant pictures of many plants.
Posted by abbas at June 17, 2011