COCOA OR CACAO TREE, THEOBROMA CACAO
Chocolate is made from the beans of this tree, and the original chocolate was a drink – a spicy bitter one made by the Aztecs, Olmecs and Mayans. The Theobroma cacao tree was named by the Swedish scientist, Carl Linnaeus in 1753 and he rather aptly called it Theobroma which means “drink of the gods” in Greek. This was how the ancient Mayans viewed it as they believed that the tree was a gift from the gods. It is believed that it has its origins in the Amazon basin, although it is now cultivated in the zone which is 20° north or south of the Equator. Therefore it grows in Brazil, the Ivory Coast, Ghana and West Africa. The Aztecs called their spicy chocolate drink “xocatl” which is how we get the word chocolate.

Columbus took cacao beans to Europe, but they didn’t catch on, it took Cortez and his trip to Montezuma to popularize the drink, when he sent the recipe to Carlos V of Spain.
The recipe which became popular with wealthy Spaniards however, was a far cry from the bitter drink of the Aztecs and Mayans, as they added sugar and nuts to it so that it was much less bitter. The main ingredients of the original drink were water, cocoa and several spices including red chillies.
In 1631 the following recipe was published in Spain by an Andalusian physician, Antonio Calmenero de Ledesma in “A Curious Treatise on the Nature and Quality of Chocolate”: -

“100 cocoa beans, 2 chillies, a handful of anise seeds, two handfuls of vanilla,2 drams of cinnamon, 12 almonds and 12  hazelnuts, ½ pound of white sugar, and enough annatto to give it colour.”
The tree grows to around 4-8 metres tall, although it can reach heights of up to 10 metres when it is shaded by larger forest trees. The cacao beans come from the pods which can be 15 – 25 cms long with each pod or fruit containing 30-40 cacaos beans or seeds.  The seeds which are red-brown and covered with a sweet white pulp are dried and fermented so that they can be processed further to make cocoa powder and chocolate.

The tree belongs to the Sterculiaceae family and so is related to the Monkey Hand Tree (Chiranthodendron pentadactylon) and the Dinner Plate Tree (Pterospermum acerfolia). The trees reach their peak cacao bean production when they are 10 years old, but can still be productive for another 12-13 years, although some trees still produce pods when they are between 30 and 40 years old. The young leaves are large, red and glossy, but as they age they turn green, while the pods can be maroon or scarlet or golden yellow.

The cocoa press was invented around 1828 which made it easier to extract cocoa butter, which is used in skin and hair preparations as well as in the manufacture of chocolate. It wasn’t until about 1879 that the Swiss developed milk chocolate and solid chocolate which most of us adore.

It seems that we love chocolate because it makes us feel good, and this is not surprising as it increases serotonin production in the body which enhances moods and produces endorphins. Studies have shown that “Consumption of cocoa flavanols result in acute improvement in mood and cognitive performance during sustained mental effort” which was the title of a research article published in 2010 in the Journal of Psychopharmacology. No wonder our ancestors though it was an aphrodisiac. In fact the Aztecs used their chocolate drink to give their warriors strength in battle, and put the flowers in baths along with other ingredients to prevent fatigue. As in 17th century Spain, the drink was reserved for the priestly caste and the Emperor and there was a tax on the beans.

Research has shown that raw cacao beans are a superfood in the same way as broccoli, kiwi fruit and others. The raw beans have more antioxidant properties than either red wine or green tea. Dark chocolate has the most concentrated cacao content and studies have shown that it is better for you than white chocolate and has many of the attributes though not all or the raw bean. Research has shown that the antioxidative properties of the beans can help to prevent prostate cancer, lower the risk of strokes and cardio-vascular disease and lower blood pressure.
Theobromine combined with caffeine contained in the bean acts as a mild stimulant and diuretic.  Anandamide is also present and this can produce a mild natural high similar to that of bhang or marijuana. 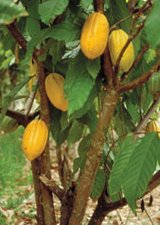 The beans contain vitamins A, C and E along with some of the B-complex vitamins, and the minerals, copper, zinc, iron, magnesium, manganese, calcium and potassium as well as bioflavonoids.
Scientists have unlocked the secret of the cocoa bean’s genome and are currently working on ways to make our chocolate eating experience healthier as they hope it will help combat diabetes, improve the cardio-vascular system functions as well as our cognitive ones.
It really does improve the mood and is comfort food, especially in winter; perhaps that is why we Brits eat so much of the stuff and consume so many chocolate drinks. The book (and film) “Chocolat” make it quite clear how magical chocolate is.

MY FAVOURITE CHOCOLATE MOUSSE
Ingredients
6 oz dark chocolate broken into very small pieces
40 gr butter
4 eggs
75 ml hot espresso coffee
30 ml very hot water
20 ml cointreau or other orange flavoured liqueuer
4 green  cardamom pods seeds removed and crushed to a fine powder (optional)
Method
Put the tiny chocolate pieces into a heat proof bowl with the butter, coffee and very hot water
Balance the bowl over a pan of boiling water but don’t let the bowl touch the water.
Leave and stir only once or twice until the chocolate has completely melted, then add the powdered cardamom if using and the cointreau. Stir to mix.
Set aside to cool while you separate the eggs. Whisk the whites to a frothy foam and mix the yolks with a fork in a separate bowl.
When the mousse mixture is warm but not hot, add the egg yolks and stir in, then fold in the whites with a metal spoon.
Pour into small cups and cover with cling film, then put in the fridge and leave for a couple of hours until the mixture is glossy and thick.
Serve with whipped double cream for a real treat.
This has Taste and is a Treat.
Posted by abbas at June 23, 2011

Email ThisBlogThis!Share to TwitterShare to FacebookShare to Pinterest
Labels: COCOA OR CACAO TREE