CENTAURY, CENTAURIUM  ERYTHRAEA
Centaury, like rue and wormwood is a bitter herb, which was one of the 15 herbs of the ancient Britons said to protect against evil spirits. It gets its name because Greek legend has it that it was the herb favoured by Chiron the Centaur who was renowned for his healing with herbs. Because of its bitterness it was known as “gall of the earth”, Fel Terrae, but despite its taste it has been employed in folk medicine for centuries. The Anglo-Saxons used its juice to counter poisonous bites from adders and spiders, and in Britain it was though that the pink, white and yellow centauries could be beneficial for different diseases. The white and yellow ones are less common than the pinky red ones, as erythros was Greek for red, hence the botanical name erythraea.

Perhaps because of its bitterness, herbalists usually used it in combination with other herbs to treat ailments, such as with Roman chamomile, Meadowsweet and Marsh Mallow for dyspepsia. It was combined with barberry (rasout) and yellow dock for jaundice, and centaury root was combined with burdock root and chamomile for anorexia and to stimulate the appetite. Equal parts of centaury and St. John’s wort were given to the elderly before bedtime to stop incontinence and to children to prevent bedwetting. The ancient Physicians of Myddfai used it alone in the following remedies:- 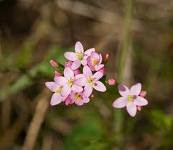 “For extreme thirst. Drink the centaury infused in hot water. This will quench thirst, and clear the breast and stomach.”
“For pain in the kidneys. Take the centaury, infused in cold water, and give it to the patient to drink.”
The white centaury was used for mucous and discharges including phlegm, the yellow was for the liver and jaundice while the more common red or pink one was for blood diseases.

A decoction of the plant can be used as a rinse to get rid of head lice, while the tisane is used for a number of ailments including to remove freckles and age spots (the decoction can also be used for these purposes), for gastroenteritis and stomach cramps, to start delayed menstruation, and in diseases of the liver and kidneys as well as for muscular rheumatism. It is also reputedly good as part of a weight loss diet, constipation, flatulence, heartburn, colic, and anaemia. Centaury was one of the main ingredients in Portland powder which also included the dried roots of the cuckoo pint and was used for gout in the early 20th century in Britain.

Centaury is native to Europe and North Africa, and can be distinguished because its flowers rarely open until after midday and don’t at all if the weather is bad. In this it is like the shamrock (wood sorrel). It grows to heights of between 3 and 20 inches with an erect stem and yellow, woody roots. The German Commission E has approved its use for dyspepsia and recommends a daily dose of 1- 2grams of the herb. A decoction can be made by boiling 30 grams of the herb in a litre of water for 20 minutes, while the following infusion can be made and taken half and hour before meals to stimulate the appetites and prevent heartburn. 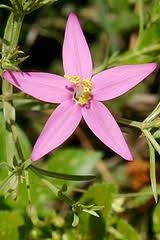 CENTAURY TISANE
Ingredients
1 oz of the dried herb or 2½.oz of the fresh herb
1 pint boiling water
honey to taste or a stevia leaf
Method
Put the herb in a pan and pour the boiling water over it.
Leave this to steep for 15 minutes before straining and drinking a wineglass full half an hour before a meal to aid digestion and stimulate the appetite.
Add honey or stevia to taste.
This has Taste and is a Treat(ment).
Posted by abbas at June 21, 2011

Email ThisBlogThis!Share to TwitterShare to FacebookShare to Pinterest
Labels: CENTAURY