STEVIA, MADHU-PATTA, STEVIA REBAUDIANA
There are more than 300 genuses of Stevia, but the only one that we know of that has the sweetening potency is this one, Stevia rebaudiana which has been used by the Guarani Indians in Paraguay for centuries to flavout their bitter maté drinks. It grows wild in both Brazil and Paraguay and was only cultivated after 1900. It was “discovered” by Italian botanist, Moises Santiago Bertoni in 1887, while he was director of the College of Agriculture in Asuncion. It wasn’t until 1908 that a ton of dried leaves was first harvested for commercial use. It is much sweeter than sugar obtained from sugar cane and sugar beets, so as a rival the sugar industry had a vested interest in not having this natural sweetener as a rival. Stevia has advantages over sugar because it does not contain any calories and does not cause cavities as sugar does.

Bertoni recognized the plant as one of the Stevias and called it rebaudiana after the Paraguayan chemist, Rebaudi who is credited with first extracting a substance called stevioside from the plant.
Stevia is known as “honeyleaf” or “sweet leaf” in many languages and kaa-he-he by the Guarani Indians who were the first to use it in Pre-Columbian times. 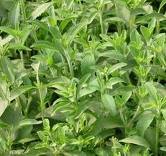 Stevia rebaudiana has been the subject of much controversy with early studies apparently showing that it could harm human health. There were fears that it is genotoxic and carcinogenic, but subsequent trials have disproved both claims. Currently, the European Commission is weighing up the evidence presented to it and will decide at the end of this month whether or not to approve Stevia’s use as a sweetener in Europe. Currently it is used as a dietary or health supplement and is legally approved in France and Germany. In the US where the controversy has mostly raged, Stevia has come into the US FDA’s category as Generally Regarded As Safe (GRAS) but as a supplement and is used in “health” drinks.

The European Food Safety Authority’s scientific panel on additives (the ANS panel) has assessed the safety of the glycosides extracted from the leaves and established Acceptable Daily Intake for their safe use which is inline with that of  WHO (World Health Organization). They have affirmed that:-
“Toxicology testing showed that the substances are not genotoxic, nor carcinogenic or linked to any adverse effects on the reproductive human system or on the developing child.”

Further they advise that a person can have a daily intake of steviol glycosides of 4 milligrams per kilo of body weight.
The WHO has stated:-
“…steviosides and rebaudioside A are not genotoxic in vitro or in vivo and that the genotoxicity of steviol and some of its oxidative derivatives in vitro is not expressed in vivo”

In other words, although when studied in test tubes or not on live subjects (in vitro) there was some evidence of genotoxicity, but this was not found in live (in vivo) subjects.
If it is more widely available it will help those with diabetes and help combat obesity, so it is to be hoped that the European Commission and the US FDA decide to accept it for use as a sugar substitute. In Japan, China, Malaysia and South Korea as well as elsewhere, it is used as such.
PUMPKIN PIE WITH STEVIA
Ingredients 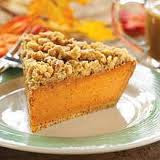 Crust:-
1½ cups digestive biscuits
1/8 tsp powdered white stevia extract
6 tbsps melted butter
1 tsp cinnamon
Filling:-
2 eggs lightly beaten
1¾ cups cooked pumpkin or butternut squash
¼ cup crushed walnuts
3 tbsps raw cane sugar
½ tsp white powdered stevia extract
½ tsp salt
1 tsp ground cinnamon
½ tsp ground ginger
½ tsp ground cloves
1/8 tsp grated nutmeg
1½  cups evaporated milk
extra crushed walnuts for topping (optional)
Method
Preheat the oven to 300°F or 180°C, Gas mark 2.
Combine the crust ingredients so that they resemble breadcrumbs, reserve ¼ and put the rest in a 9 inch pie plate, pressing along the bottom and sides.
Put in the oven and bake for 15 minutes or until golden brown.
Remove from the oven and leave to cool
Turn the oven up to 425°F, 220°C or Gas mark 7.
Combine the filling ingredients and stir well to mix.
Pour the mixture into the pie crust and sprinkle the tops with extra walnuts and reserved crumbs.
Bake for 15 minutes, then reduce the heat to 350°F, 180°C or Gas mark 6 and bake for 35 mins or until a knife or skewer stuck into the centre comes out clean.
Serve with whipped cream.
This has Taste and is a Treat.
Posted by abbas at June 22, 2011

Email ThisBlogThis!Share to TwitterShare to FacebookShare to Pinterest
Labels: STEVIA