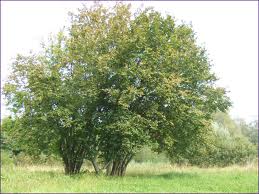 HAZEL TREE, CORYLUS AVELLANA
The hazel is a common sight in British woodlands and in old hedgerows as its young shoots are pliable and lend themselves to coppicing. It is a member of the Betulaceae family of the order Fagalis and related to the birch tree, native to Europe and western Asia. It was a source of food for prehistoric people and was utilized for making small hunting spears for rabbits and hares and for making thatch; it could be bent into U shapes and was useful to hold down thatch on roofs. It has been used to make barrel hoops and to make shepherds crooks and walking sticks. Hazel rods were the wands of the Druids and it is said that Saint Patrick used a hazel rod to banish the snakes from Ireland. The rods were used as symbols of authority by the ancient Celts, and there are many legends surrounding the hazel tree which was one of the sacred trees of the Druids, along with the Mountain Ash and the Oak. Hazel trees are often found in woods of oak and beech.

Shepherds’ crooks were also made from hazel but they were shaped while still growing on the tree. Fishing poles and spits for roasting over a fire were also made from hazel branches.
There are many old legends about the hazel tree which was the Tree of Knowledge for Celts. One is about the Irish hero Finn mac Cumhaill who is said to have gained his prophetic abilities and wisdom after his encounter with a Salmon of Wisdom. The Celts believed that there was a well in the Otherworld, or perhaps at the source of one of several rivers in Ireland. This was the Well of Wisdom in which swam the sacred salmon (sacred to the Druids). Around the well were the Nine Hazel Trees of Wisdom and these sprouted nuts, flowers and leaves at the same time. The nuts dropped into the well and produced bubbles which spread out into the worlds and the waters and bubbles from the well were drunk by poets, artists and other creative people. The nuts were eaten by the salmon, which had brown spots on its skin, which recorded how many nuts it had eaten. The salmon with the most spots was the wisest, and Finn’s tutor had caught the wisest salmon. He put Finn to watch it while it cooked, and some of the hot stock fell on his thumb, so of course he put it into his mouth to ease the pain, and thus acquired his wisdom and powers of prophecy.
The hazel nut symbolized the path of wisdom for the Druids, as they believed that knowledge came from within, and the nut has to be cracked in order to get at the sweet meat inside it.
The hazel has also provided water divining rods and at one time in Ireland these rods were used (up until the 16th century) to detect thieves. The young branches can be woven into baskets, and were made into collars for horses to protect them from malignant faeries. The wattles (young stems) were used to make huts and houses and were the wattles of wattle and daub structures. There is evidence of this use as early as 6,000 BC.
In ancient Irish laws, a half shell of a hazel nut was the smallest measure of liquid, used to measure blood paid to victims in compensation for the crimes they had suffered. The half shell was said to be a measure of five drops of blood.
In traditional medicine, the leaves of the hazel tree can be made into an infusion to purify the blood, and pollen from the flowers was used to treat epilepsy. Decoctions of the bark were used for skin problems, either internally or externally, applied directly onto the skin. Sap from the branches was used directly on the skin to treat eczema, ringworm and other skin problems.
W.B. Yeats, (1865-1939) the Irish poet and playwright, wrote these lines at the beginning of his poem, “Mongam Thinks of His Past Greatness When a Part of the Constellations of Heaven”: -
“I have drunk ale from the Country of the Young
And weep because I know all things now:
I have been a hazel tree and they hung
The Pilot Star and the Crooked Plough
Among my leaves in times out of mind.”
The nuts are food for squirrels, wood mice and dormice and the tree produces both male and female flowers. The male ones are the catkins or “lamb’s tails” that hang from the branches, while the female ones look like small red buds, and it is these which develop into nuts. The male flowers sprout in late October / early November but don’t release their pollen until February – April. The flowers appear before the leaves, but these are the first to appear in spring and the last to fall in autumn. They have been used as cattle fodder in the past.

HAZEL LEAF TISANE
Ingredients
2 oz fresh hazel leaves, shredded
250 ml boiling water
Method
Put the shredded leaves into a cup and pour the boiling water over them.
Leave them to steep for 10-15 minutes, then strain and drink.
You may want to add a little honey to sweeten the tisane.
This has Taste and is a Treat(ment).
Posted by abbas at June 07, 2011