PEEPAL, PIPAL, BO TREE, SACRED FIG TREE, FICUS RELIGIOSA
The Peepal tree is known by many names in the Indian subcontinent, including Bodhi tree, Sacred tree, Ashvatta and the Buddha tree. It is a large fast-growing deciduous tree that has leathery green heart-shaped leaves and a spreading crown. It is thought to be the female counterpart of the bohar or banyan tree, and they should, it is thought, be planted near to each other. In one custom a young person plants a peepal tree and a bohar tree close to home and there is a ceremony in which the trees are ‘married’. This will protect the home and the young person from misfortune it is believed. As a member of the Ficus family its fruit are purple figs like those of the Punjabi fig tree and both ripen in May. It is sacred to Buddhists and Hindus and people leave coloured silks on the tree as they pray for increased fertility, children and a happy long life.

In the past women who were infertile would stand under a peepal tree in spring when or after it rained and open their mouths to catch the water that drained from the new leaves. It is said that this worked for some.
Another remedy for a woman’s infertility is to take 10 leaf buds and an eighth of a litre of cow’s milk and boil this until the milk has gone. Leave to cool and eat it. You can eat the same amount twice a day or more for seven days and Insh’allah Allah will help.

It is said that Buddha achieved Enlightenment while sitting under a peepal tree, and its leaves are used in religious ceremonies. It is a symbol of peace and Enlightenment and a personification of Buddha. For Hindus it is sacred to Vishnu who was born under a peepal tree, and it is a sin to destroy either this tree or the banyan.
Some Indians preserve the leaves of this tree by painting them with gold acrylic paint and they are then decorations with religious significance. A deep red dye is obtained from the bark, but this is of secondary importance, as the peepal tree is a religious and medicinal tree. 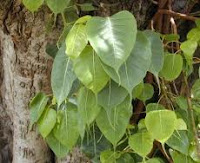 All parts of the tree are used in folk medicine, with the juice from the leaves being used for ear ache. People heat the leaves over a flame and collect the juice from them. The powdered bark is used to heal wounds, and used in a poultice to reduce the glandular swelling when children have mumps. The root bark is used in preparations for stomach problems while the roots are used for gout and are also chewed to prevent gum diseases. The fruit, like all figs is used as a laxative and to prevent constipation; it is also employed to promote digestion and stop vomiting. It is believed to be good for the heart, to cure bad breath and figs quench thirst. The powdered fruit is given to people with asthma. The seeds are used as a diuretic and to cure urinary tract disorders, and sometimes the leaves are used to cure constipation if the fruit is not available. Parts of the tree are used for jaundice and it is also said to stop palpitations and strengthen the heart.

One remedy for constipation is to dry the leaves in the sun then grind them to a powder, mix with gur (jaggery) and anise then mix with water and drink. For dysentery fresh peepal leaves and coriander leaves are given with sugar and chewed slowly.
In folk medicine to quench a thirst you take the bark of the peepal tree and burn it until it becomes charcoal, then put it in a glass of water and drink the water. (This is similar to a remedy my father gave me as a child, if I had been vomiting; he would take an ember from the fire and put it in a glass of water and I would have to drink it. It didn’t taste bad and it always worked.)  For diarrhoea again burn the bark and use the charcoal, but crush it and mix with a little water to form a paste, and put ½ tsp on the tongue then swallow it with water. (This is for babies and young children.)  To bring out bruises and relieve swellings take the bark and crush it with a little water so that it forms a paste, then put this on the affected area and the bruise will start to appear or the swelling will go down. If you have frequent nosebleeds, grind the bark and soak in water overnight. Strain, add sugar and drink the water in the morning before you get out of bed.

In Ayurvedic medicine, the bark is for diarrhoea, dysentery, piles stomach problems, gonorrhea burns and used as an anti-inflammatory. A decoction of the bark is given for gonorrhea, hiccoughs, skin diseases and vomiting. It is said to have cooling properties. The leaves and tender shoots are purgative and have wound-healing properties and are given to cure some skin diseases. The juice of the leaves is for sexual problems, such as erectile dysfunctions and impotency, and is thought to be an aphrodisiac. It is also used to treat asthma, diarrhoea, toothache and gastric problems as well as migraines, eye problems and scabies. A decoction of the leaves is used to kill the pain of toothache. The dried fruit is used to treat T.B., fever, paralysis and piles, and the seeds are cooling and used as a laxative. The latex from the tree is used for neuralgia, inflammation and piles, so it has the reputation of being a cure-all.
The fruit contains pinene as does the Chaste tree and wormwood, as well as limonene, also found in citrus fruits such as lemons and citrons. Parts of the tree have tannins which may possess the ability to increase collagen which would promote wound-healing. The figs help the body produce serotonin which is a mood enhancer, and the peepal tree can help in diabetes as it lowers blood glucose levels.

Clinical trials have shown that many of the traditional uses of the peepal tree have a sound basis, as it has been shown that the tree has antifungal properties, antimicrobial ones, is a source of antioxidants, can help stop convulsions, is immunomodulatory, can lower blood cholesterol levels, can help with asthma, is estrogenic, can enhance cognitive powers and mood, has some pain-killing properties, and can kill intestinal worms. The root contains phytosterols, amino acids, phenolic compounds and furanocoumarins. The bark contains tannins, saponins, flavonoids, steroids, terpenoids and cardiac glycosides.
More research is to be done on the peepal tree, but it seems as though traditional healers, once again, know what they are doing when it comes to plant medicine.
PEEPAL PICKLE
Ingredients
leaf buds (young leaves before they open) of peepal
water
salt
mustard oil
Method
Wash the leaves carefully and then boil them in water to get rid of the sour taste; then discard the water.
Sprinkle salt over the leaf buds and leave them in the sun to dry off.
When the water has evaporated, put them in a glass jar with a tight-fitting lid. Pour mustard oil over them to cover them and put on the lid.
Leave the jar in the sun for 2 days and the preserve will be ready.
Use this as a tasty remedy for bouts of sickness and diarrhoea.
If you have fever, take 1 tbsp of the pickle and it will soon go.
This has Taste and is a Treat(ment).
Posted by abbas at June 19, 2011