WHAT IS SALAJEET OR SHILAJIT? ASPHALTUM OR MINERAL PITCH - ELIXIR OF LIFE: HEALTH BENEFITS AND USES OF SALAJEET

SALAJEET, SHILAJIT, MINERAL PITCH, ASPHALTUM
Salajeet is the Urdu name for this mineral pitch and shilajit is the name in Hindi. It is the concentrated plant matter from prehistoric plants that were trapped in mountain ranges when tectonic plates collided to give birth to the mountains. (In the same way a s an ancient sea was trapped when the Himalayas formed, which is why we get Himalayan sea salt.) In the Himalayas this tar-like substance oozes from the rocks during spring and summer and local people gather it for medicinal use. It is fed to Pathan children in milk to make them strong and healthy, and the mountain people and hakims swear by it for all ills. It contains so many minerals that it is good for bone, muscle and tissue growth, and one man we know, who is a local book seller, says that his hand was beginning to get crooked and hook-like, so he took salajeet which he gathered himself as he didn’t trust anyone else to give him the unadulterated stuff, for 15 days and now is hand is back to normal.
An Englishman found it in the 1870s in the Himalayas and noticed that the monkeys that fed on it were not bald at 10 years of age as were their relatives in the plains. He attributed this to the sticky black substance they ate and this is how the West first heard of salajeet, which has been used in medicine in the Indian subcontinent since before 6 BC when the first extant medical texts were written.
Shilajit means “rock-like” and this attests to its virtues of making the body as firm as a rock and able to slow the ageing process and withstand the ravages of time on the body. In the Charak Samhita which is one of the earliest medical texts on internal medicine still in existence, and used by Ayurvedic practitioners even today, there is a reference to shilajit which says that without it there can be no cure for any illness, although it can be mixed with other natural substances to effect a cure. 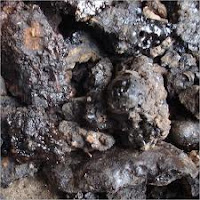 In Ayurvedic medicine it is used for numerous ailments including chronic bronchitis, digestive disorders, kidney and bladder problems, nervous diseases, anaemia, fractured bones and arthritis. It is also used in the treatment of diabetes, for insulin resistance, for liver problems such as jaundice and to rid the body of internal parasites. It is, according to the ancient medical treatises, the “conqueror of mountains and destroyer of weakness” and is known as the Indian Viagra as it is said to rejuvenate a man’s sexual prowess and stop erectile dysfunctions and cure impotency.
Some traditional healers purify it before using it by putting it in cow’s milk and dissolving it, then straining it through muslin several times to get rid of impurities. It is then dried in the milk in the sun. When you use it you have to drink a lot of cow’s milk, they say.
It is black-brown and varies in consistency, and probably in the minerals it contains, depending on where it comes from. Its effectiveness is also said to depend on its place of origin. It is said that it is not only found in the Himalayas but also in the Urals, Caucasus Mountains, Tien-Shan, Pamir, the Northern Pollack range in Australia and in the Hindu Kush.
Paul Flechsig of the Department of Neurochemistry in the Institute of Brain Research at Leipzig University found in his study that mineral pitch enhanced cognition and memory in Alzheimer’s sufferers.
It is said to have the abilities to reduce stress induced ulcers in vivo in the lab, and to help the body’s cells grow and become rejuvenated, thus slowing the aging process, which is why some call it the elixir of life. It may regulate blood pressure without significantly changing the heart rate, and speeds up the regeneration of muscles, nerves and bones. It has analgesic (pain-killing) and anti-inflammatory properties, as well as antiseptic ones (because it is thought of the benzoic acid it contains). It may also help the liver and cure anaemia.

It contains the minerals aluminium, antimony, calcium, cobalt, copper, iron, lithium, magnesium, manganese, molybdenum, phosphorous, silica, sodium, zinc and the lippuric, benzoic, fulvic, chebulic and tannic acids, plus resins, gums, albuminoids and glycosides. Several of its constituents rarely occur in a natural form.
However, before you rush out to buy capsules etc which are said to contain mineral pitch or asphaltum as it is known in Latin, remember the book seller who didn’t trust anyone else to sell him the real thing. Also, if you suffer from gout you should not take mineral pitch as it produces uric acid in the body.
Posted by abbas at June 03, 2011

Email ThisBlogThis!Share to TwitterShare to FacebookShare to Pinterest
Labels: SALAJEET