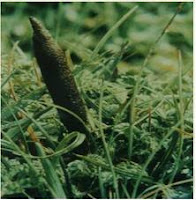 THE CATERPILLAR FUNGUS, CORDYCEPS SINENSIS
The story of the caterpillar fungus is a lot like the one of how the Ethiopian goat herder discovered coffee, and how salajeet was discovered by the English. In the case of coffee a goat herder noticed that after eating the fruit from a bush, his goats became livelier, while an Englishman traveling in the Himalayas saw monkeys eating a black sticky substance, and thought that this may have been why older monkeys had more hair than the ones in the plains. In the case of the caterpillar fungus Tibetan yak herders watched as their yaks became very lively and scoured the grass they had been grazing on and found this fungus.(I can’t imagine what a yak does when it becomes lively!) The fruiting head of this fungus looks a little grass-like and I guess it would be hard to spot, if you weren’t looking carefully for it. 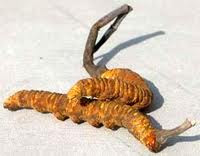 The original find was soon a matter for the Chinese Emperors who discovered that the fungus had invigorating qualities, and so it was seen as an anti-ageing invigorating “herb” for centuries. Of course like cacao in Mayan culture and later in Spain, only the wealthy could afford this “magical mushroom” because it was so expensive due no doubt to its rarity. At one time it was worth four times its weight in silver.
The West discovered it when a French Jesuit priest, Jean Baptiste du Halda was introduced to it by the Chinese Emperor, whose guest he was. It first appeared in Tibetan medical writings in the 15th century and in later European Materia Medica in the 18th century.

As it is a parasite C. sinensis can grow on caterpillars, insects and other fungi among other things. The picture of it looking distinctly like a caterpillar is the fungus that grew on one of these creatures and devoured its flesh. One of the things with this fungus is that although there have been hundreds of studies done on it most are questionable for one reason or another. For example, we don’t know which host the fungus grew on in some studies, and the constituents of the fungus would depend on the nutrients taken from the host. Other studies have not been translated entirely from Chinese, so the quality of the research is in doubt. In still other studies the researchers have had a vested interest in promoting the fungus because they work for the health supplement companies.

Now cultivated C. sinensis are used in the US but no comparative studies have been done on the properties of these compared to their wild relatives.
What is certain is that it has been used in Chinese traditional medicine for centuries to rejuvenate the aging and to boost energy levels. It has also been used to promote the health of the lungs, heart and immune system. It is said to improve male sexual functions too.

It can increase oxygen capacity in the lungs, and boost energy levels, banishing fatigue and aching muscles in athletes. It is said to have helped athletes win many events, and sometimes set new world records. It has been proved to have anti-bacterial and anti-viral properties, and it may have potent antioxidant qualities. It enhances blood circulation and lowers cholesterol levels, it is believed from some studies. C. sinensis also supports the functions of the lungs, kidneys and liver, as well as boosting the immune system. It may have anti-cancer properties.

Some of the specimens of C. sinensis which have been analyzed contain all the essential amino acids and others, vitamins E, K, an assortment of minerals and the fatty acids, oleic, linoleic, palmitic and stearic.
Before you are tempted to buy a supplement containing this herb, try to make sure that it is genuine. Alternatively find other herbs that are native to your area to do the work you want this one to do.
Posted by abbas at June 26, 2011