SEA GRAPE, EPHEDRA DISTACHYA
The sea grape is native to Central and Eastern Europe, although other species of Ephedra grow in Asia , eastern and North Africa, Europe and both North and South America, in arid zones. It likes sandy places, hence the name sea grape, which is the same in Turkish, deniz usumu and French, raisin de mer. It has needle-like leaves which are the stems on which the usually yellow flowers and edible red fruit grow. Its seeds are dark brown, glossy, smooth and oval, with 2 per fruit. The evergreen stems may be erect or recumbent, and grow to between 25 and 100 cm long or tall, and can be harvested and dried for later use at any time of year.

In China and the Indian subcontinent Ephedra species have been used in traditional medicine for centuries, for bronchial complaints, asthma and allergies such as hay fever. Dioscorides also used Ephedra and it was used in traditional medicine in Europe during the 15th to the 19th century.  The German Commission E has approved the use of Ephedra for mild bronchiospasms and related problems.

Ephedra contains ephedrine which has similar effects to amphetamines and to the adrenaline naturally produced by the body. Its use has been prohibited in all international sporting events as it is considered a performance-enhancer. Ephedrine can cross the blood-brain barrier and triggers the brain to release dopamine, so stimulating the central nervous system. In the short term this enhances moods and improves alertness, while decreasing feelings of fatigue and increasing physical activity. Ephedrine, which is an alkaloid, was given to Japanese kamikaze pilots in World War II, reportedly. 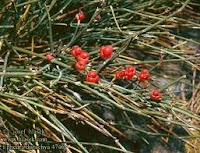 Ephedra has had some fame as a weight loss herb, although alone it is not terribly effective; combined with caffeine or aspirin its effects are enhanced. In fact it works better for allergies when used in combination with other herbs such as Thymus vulgaris (thyme), Primula veris (cowslip), Hyssopus officinalis, (Hyssop), Urtica dioicea (nettles) or Chamaemelum nobile (Roman chamomile).
In Ayurvedic medicine Ephedra is used for arthritis and edema, principally. 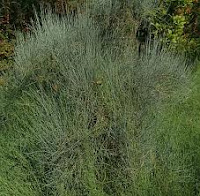 It should only be taken on a doctor’s advice and should not be used with monoamine oxidase (MAO) inhibiters and people with high blood pressure, angina, glaucoma, prostate diseases and hyperthyroid problems should avoid it.
Posted by abbas at June 18, 2011