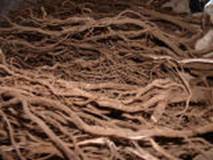 KAVA KAVA, PIPER METHYSTICUM
Kava, or kava kava, is a member of the pepper family and is related to the long pepper as well as to black pepper. It is native to the Pacific Islands where it is used in a ceremonial drink served to honoured guests following a centuries old tradition. It has the same effects as alcohol, so it should be of little surprise that it can, apparently cause liver damage especially if taken in large quantities. There are more than a hundred varieties of kava kava, or yaqona root, and many of these grow on Vanuatu and Fiji where it was first domesticated thousands of years ago. It is a valuable cash crop on these islands and in Hawaii where it is called Awa.

Recently the French hair care company L’Oreal took out a patent on kava to use in a product which will promote hair growth and stop hair loss, they say. This is a far cry from the times when shamans used a beverage from the root to go into trances. The beverage is not a true hallucinogen, neither is it alcoholic, although it has similar effects to both types of drug. Like alcohol it has been linked to liver damage too.
In traditional medicine in the Pacific region, kava is used to alleviate anxiety and as a sedative, as it has relaxing properties, and has been used medicinally and recreationally for thousands of years.  However more than 30 cases of liver damage have been reported in Europe which have been linked to the consumption of kava, so in March 2002 the USFDA issued an advisory notice about the ‘rare’ incidence of liver damage possibly caused by kava intake. It is not known whether the reports of liver damage were in people who mixed kava with alcohol or other herbs, drugs or medications; combining kava with anything else is not advised.

The beverage is made from the roots of the kava shrub which are dug up and dried in the sun then pounded to a powder and mixed with cold water. Clinical trials have been conducted on kava root and it has been found to relieve anxiety but because of the potential dangers of liver damage, it is safer to use other herbal preparations for anxiety, such as olive leaf tisane. A study conducted on kava in 2004 showed that 300mg of kava may improve cognitive performance and enhance the mood. This is a point in its favour, as drugs like Valium which are used to treat anxiety decrease cognitive performance overall. It seems from research that kava can improve sleep quality and help in cases of insomnia, although more research is needed. In lab animals extracts of kava root have been found to relax muscles, promote sleep and reduce convulsions. The roots also have pain-killing properties and when kava is chewed there is a tingling sensation and numbness which is temporary, on the tongue. Its active ingredients include methysticum, kawain and dihydrokawain, which are kavalactones.

In Europe kava kava has been used to treat a variety of illnesses for more than 150 years, some of the treatments were for gonorrhea, vaginitis, night time incontinence and problems with the gastrointestinal tract. It is said to be an effective diuretic and good for rheumatism, gout, bronchial problems, and ailments resulting from cardiac problems. It has also been used as a local anaesthetic to relieve pain and is said to have an antiseptic effect on urinary tract disorders.
If you want to try out kava, you should have between 2 and 4 grams and make this into a decoction by boiling it in water and reducing the amount of water by half. This amount can be consumed up to three times a day, for anxiety or stress. It will take perhaps 4 weeks for you to notice a difference.
There is a ceremony in Tonga for drinking kava from a communal bowl and this spread to Fiji in the 17th century. The whole of a village could participate rather than just the shamans. It is traditionally drunk from halves of coconut shells.
Researchers do not yet understand how kava works, and you should be aware that it is banned in some countries, so if you order it online check to see that you can get it legally through customs before buying any. It is not banned in the US as the evidence against is patchy, and it has been used for centuries without Pacific Islanders seeming to have a high incidence of liver problems.
Posted by abbas at June 02, 2011